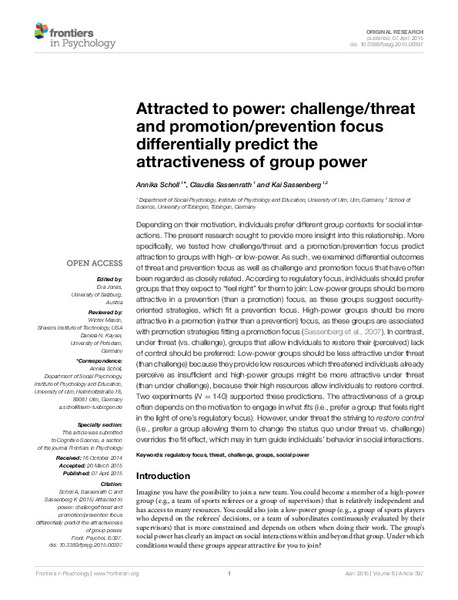 Depending on their motivation, individuals prefer different group contexts for social interactions. The present research sought to provide more insight into this relationship. More specifically, we tested how challenge/threat and a promotion/prevention focus predict attraction to groups with high- or low-power. As such, we examined differential outcomes of threat and prevention focus as well as challenge and promotion focus that have often been regarded as closely related. According to regulatory focus, individuals should prefer groups that they expect to “feel right” for them to join: Low-power groups should be more attractive in a prevention (than a promotion) focus, as these groups suggest security-oriented strategies, which fit a prevention focus. High-power groups should be more attractive in a promotion (rather than a prevention) focus, as these groups are associated with promotion strategies fitting a promotion focus (Sassenberg et al., 2007). In contrast, under threat (vs. challenge), groups that allow individuals to restore their (perceived) lack of control should be preferred: Low-power groups should be less attractive under threat (than challenge) because they provide low resources which threatened individuals already perceive as insufficient and high-power groups might be more attractive under threat (than under challenge), because their high resources allow individuals to restore control. Two experiments (N = 140) supported these predictions. The attractiveness of a group often depends on the motivation to engage in what fits (i.e., prefer a group that feels right in the light of one’s regulatory focus). However, under threat the striving to restore control (i.e., prefer a group allowing them to change the status quo under threat vs. challenge) overrides the fit effect, which may in turn guide individuals’ behavior in social interactions.