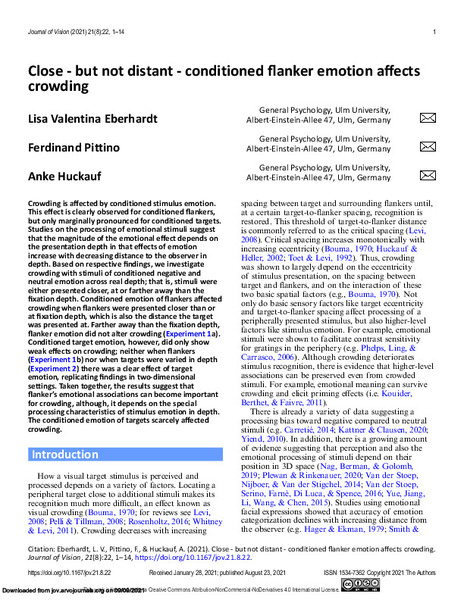 Crowding is affected by conditioned stimulus emotion. This effect is clearly observed for conditioned flankers, but only marginally pronounced for conditioned targets. Studies on the processing of emotional stimuli suggest that the magnitude of the emotional effect depends on the presentation depth in that effects of emotion increase with decreasing distance to the observer in depth. Based on respective findings, we investigate crowding with stimuli of conditioned negative and neutral emotion across real depth; that is, stimuli were either presented closer, at or farther away than the fixation depth. Conditioned emotion of flankers affected crowding when flankers were presented closer than or at fixation depth, which is also the distance the target was presented at. Farther away than the fixation depth, flanker emotion did not alter crowding (Experiment 1a). Conditioned target emotion, however, did only show weak effects on crowding; neither when flankers (Experiment 1b) nor when targets were varied in depth (Experiment 2) there was a clear effect of target emotion, replicating findings in two-dimensional settings. Taken together, the results suggest that flanker's emotional associations can become important for crowding, although, it depends on the special processing characteristics of stimulus emotion in depth. The conditioned emotion of targets scarcely affected crowding.