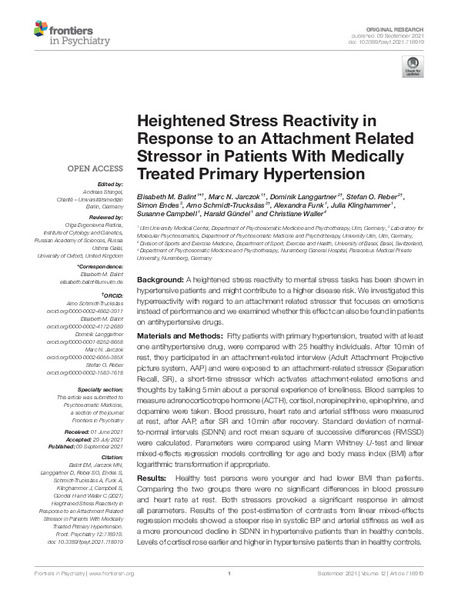 Background: A heightened stress reactivity to mental stress tasks has been shown in hypertensive patients and might contribute to a higher disease risk. We investigated this hyperreactivity with regard to an attachment related stressor that focuses on emotions instead of performance and we examined whether this effect can also be found in patients on antihypertensive drugs. Materials and Methods: Fifty patients with primary hypertension, treated with at least one antihypertensive drug, were compared with 25 healthy individuals. After 10 min of rest, they participated in an attachment-related interview (Adult Attachment Projective picture system, AAP) and were exposed to an attachment-related stressor (Separation Recall, SR), a short-time stressor which activates attachment-related emotions and thoughts by talking 5 min about a personal experience of loneliness. Blood samples to measure adrenocorticotrope hormone (ACTH), cortisol, norepinephrine, epinephrine, and dopamine were taken. Blood pressure, heart rate and arterial stiffness were measured at rest, after AAP, after SR and 10 min after recovery. Standard deviation of normal-to-normal intervals (SDNN) and root mean square of successive differences (RMSSD) were calculated. Parameters were compared using Mann Whitney U-test and linear mixed-effects regression models controlling for age and body mass index (BMI) after logarithmic transformation if appropriate. Results: Healthy test persons were younger and had lower BMI than patients. Comparing the two groups there were no significant differences in blood pressure and heart rate at rest. Both stressors provoked a significant response in almost all parameters. Results of the post-estimation of contrasts from linear mixed-effects regression models showed a steeper rise in systolic BP and arterial stiffness as well as a more pronounced decline in SDNN in hypertensive patients than in healthy controls. Levels of cortisol rose earlier and higher in hypertensive patients than in healthy controls. Conclusion: Vascular, autonomic, and hypothalamic pituitary adrenal axis response is heightened in medicated subjects with hypertension in response to attachment-focused stressors compared to healthy subjects. We conclude that the remaining hyper-reactivity even with sufficient antihypertensive medication still poses a substantial risk for affected patients. New ways to diminish this risk should be developed.