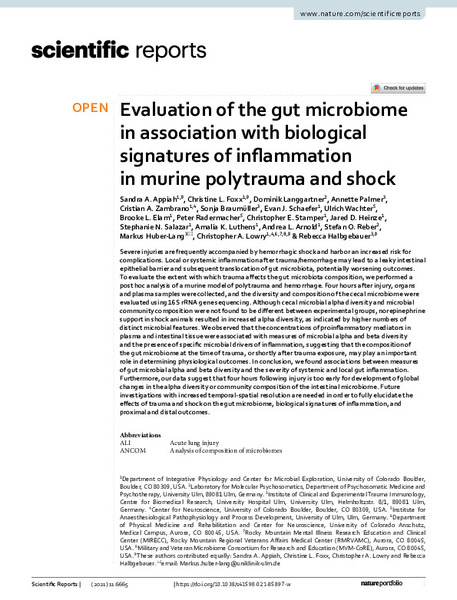 Severe injuries are frequently accompanied by hemorrhagic shock and harbor an increased risk for complications. Local or systemic inflammation after trauma/hemorrhage may lead to a leaky intestinal epithelial barrier and subsequent translocation of gut microbiota, potentially worsening outcomes. To evaluate the extent with which trauma affects the gut microbiota composition, we performed a post hoc analysis of a murine model of polytrauma and hemorrhage. Four hours after injury, organs and plasma samples were collected, and the diversity and composition of the cecal microbiome were evaluated using 16S rRNA gene sequencing. Although cecal microbial alpha diversity and microbial community composition were not found to be different between experimental groups, norepinephrine support in shock animals resulted in increased alpha diversity, as indicated by higher numbers of distinct microbial features. We observed that the concentrations of proinflammatory mediators in plasma and intestinal tissue were associated with measures of microbial alpha and beta diversity and the presence of specific microbial drivers of inflammation, suggesting that the composition of the gut microbiome at the time of trauma, or shortly after trauma exposure, may play an important role in determining physiological outcomes. In conclusion, we found associations between measures of gut microbial alpha and beta diversity and the severity of systemic and local gut inflammation. Furthermore, our data suggest that four hours following injury is too early for development of global changes in the alpha diversity or community composition of the intestinal microbiome. Future investigations with increased temporal-spatial resolution are needed in order to fully elucidate the effects of trauma and shock on the gut microbiome, biological signatures of inflammation, and proximal and distal outcomes.