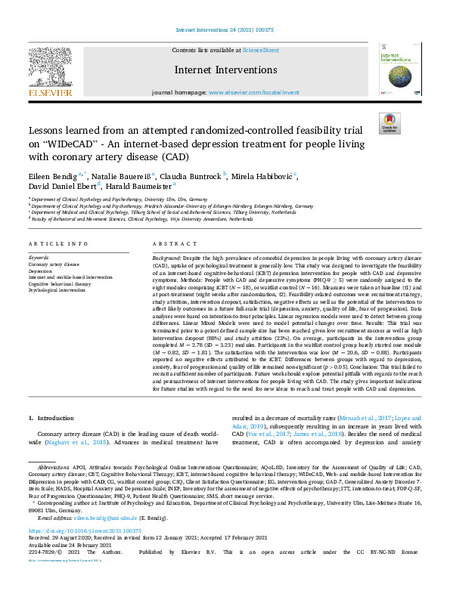 Background: Despite the high prevalence of comorbid depression in people living with coronary artery disease (CAD), uptake of psychological treatment is generally low. This study was designed to investigate the feasibility of an internet-based cognitive-behavioral (iCBT) depression intervention for people with CAD and depressive symptoms. Methods: People with CAD and depressive symptoms (PHQ-9 ≥ 5) were randomly assigned to the eight modules comprising iCBT (N = 18), or waitlist-control (N = 16). Measures were taken at baseline (t1) and at post-treatment (eight weeks after randomization, t2). Feasibility-related outcomes were recruitment strategy, study attrition, intervention dropout, satisfaction, negative effects as well as the potential of the intervention to affect likely outcomes in a future full-scale trial (depression, anxiety, quality of life, fear of progression). Data analyses were based on intention-to-treat principles. Linear regression models were used to detect between group differences. Linear Mixed Models were used to model potential changes over time. Results: This trial was terminated prior to a-priori defined sample size has been reached given low recruitment success as well as high intervention dropout (88%) and study attrition (23%). On average, participants in the intervention group completed M = 2.78 (SD = 3.23) modules. Participants in the waitlist control group barely started one module (M = 0.82, SD = 1.81). The satisfaction with the intervention was low (M = 20.6, SD = 0.88). Participants reported no negative effects attributed to the iCBT. Differences between groups with regard to depression, anxiety, fear of progression and quality of life remained non-significant (p > 0.05). Conclusion: This trial failed to recruit a sufficient number of participants. Future work should explore potential pitfalls with regards to the reach and persuasiveness of internet interventions for people living with CAD. The study gives important indications for future studies with regard to the need for new ideas to reach and treat people with CAD and depression.