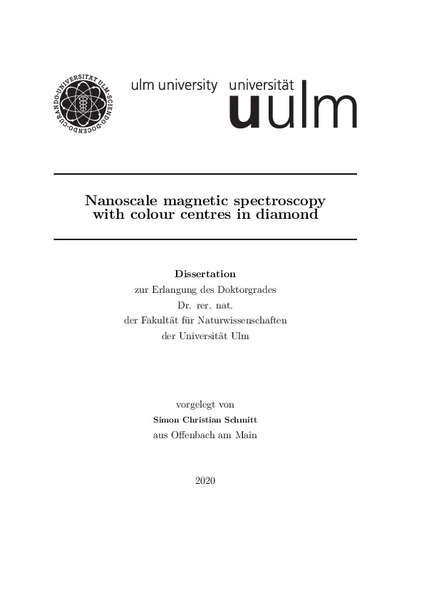 Quantum technologies are expected to significantly change our world in the next decades and the possible applications are diverse – ranging from quantum computation and encryption to metrology with unprecedented sensitivity. This thesis focuses on quantum sensing and imaging based on single nitrogen-vacancy (NV) centres in diamond to measure magnetic fields. Its electronic spin qualifies this point defect as a highly sensitive quantum sensor and its atomic size offers nanoscale spatial resolution. The simple optical initialisation and readout, together with the relatively long coherence time at ambient conditions, make NV centres promising candidates for biological applications and in particular for nuclear magnetic resonance (NMR) on the nanoscale. Recording the spectral information on the nanoscale allows to determine the structure of single or just a few molecules. However, the current main problems and challenges include insufficient spectral resolution, artificial signals and overall poor performance. In this thesis new spectroscopic techniques which tackle these issues are presented. First, it is shown that by randomisation of control pulse phases spurious harmonic signals can be suppressed, which otherwise complicate spectrum interpretation and can lead to false signal identification. At the same time the effects of pulse imperfections are mitigated. Furthermore, a protocol allowing to measure with a coherence independent spectral resolution is presented. It is demonstrated that linewidths below 1mHz are possible, which is an improvement of more than seven orders of magnitude compared to traditional methods. Due to its simple implementation, the protocol is relevant for many applications. Initially developed to measure signals oscillating up to several megahertz, it is further shown that modifications allow to extend the frequency range into the gigahertz domain. Finally, quantum frequency discrimination with the task to differentiate between two frequency distributions using a quantum sensor is analysed. An optimised protocol is introduced and the influences of different readout strategies are discussed with respect to the probability to make an incorrect decision. These findings are useful for diagnostic tests in NMR.