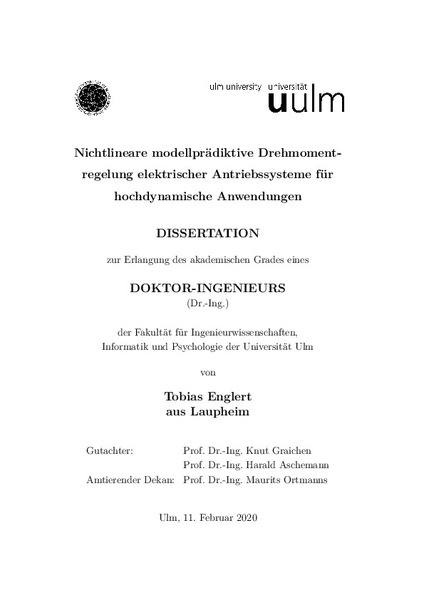 Nonlinear model predictive control ((N)MPC) techniques are used more and more frequently for high-performance control of dynamic nonlinear multiple-input and multiple-output systems. A main reason for this is the systematic consideration of (nonlinear) constraints, as they frequently occur in mechatronic systems. Typically, the sampling times of such systems are in the (sub-)millisecond range and the control strategy must be implemented in an embedded system with limited resources. Especially in time-critical applications with small computing power, the real-time implementation of MPC algorithms still poses a challenge. Torque control of electrical machines is such a challenging problem with nonlinear dynamics, sampling times in the microsecond range and nonlinear constraints on the phase voltage as well as on the phase and the DC link current. The number of electric servo drives is constantly increasing due to the flexible application in both automotive and industrial environments. The type of machine plays an important role for the application. Traditionally, permanent magnet synchronous machines (PMSMs) are used for precision applications due to their high dynamics, high energy density and good efficiency. Because of improving control strategies, however, induction machines, which are characterized by their robust and inexpensive design, are also increasingly used in more demanding applications. In general, the requirements on the drives with regard to speed and accuracy of torque generation are very high, especially in critical applications such as electric power steering systems or machine tools. Due to increasing environmental awareness and economic considerations, there is also a growing interest in operating the machines as efficiently as possible and to fully exploit their physical limits. Motivated by the above-mentioned challenges, an MPC approach for fast and energy-efficient torque control of electrical machines is developed in this thesis. A particular focus is on the development of suitable methods to take into account the constraints mentioned at the beginning. On the basis of an augmented Lagrangian approach, the nonlinear constrained optimal control problem is transformed into an unconstrained problem. This allows one to apply a tailored gradient method for solving the unconstrained problem in a time efficient manner. In addition, a fixed point iteration strategy, which further reduces the algorithmic complexity for a certain class of applications. For example, the DC link current constraints, which play an important role in automotive need not always be taken into account. By seamlessly integrating the solution methods into the augmented Lagrangian framework, an MPC algorithm tailored exactly to the problem at hand is developed. Runtime analyses prove that the torque control for PMSMs with a sampling time of 500µs is real-time feasible even on an electronic control unit (ECU) level. Due to the more complex model structure, the computing time of the induction machines' control is somewhat higher in direct comparison. Nevertheless, real-time feasibility is still achieved on a dSPACE rapid prototyping platform. Another limiting factor for embedded implementation is the memory footprint of the algorithm. For this reason, the developed algorithms are kept streamlined and have an almost negligible memory requirement of less than 10kB. The basis of the control design is a mathematical model of the machines in the flux-oriented dq-coordinate system. Current-dependent model parameters take saturation effects into account and thus ensure the validity of the model even in case of a significant overload of the machines. At the same time, the complexity of the models is low enough in order to be parameterized using the standard inverter without additional sensors. In order to increase energy efficiency with regard to copper losses, a new setpoint computation is developed for both the PMSM and the IM. The calculation of the setpoints is based on a hierarchical, static optimization problem and ensures that the setpoints meet all constraints in the stationary case. Experimental results illustrate the performance of the controls in numerous scenarios. In order to better classify the results, a state--of--the--art field-oriented controller (FOC) is implemented for both machines. The setpoints for these controls are calculated with the methods developed in this thesis, which ensures that the FOC complies with the constraints in the best possible way in order to provide a fair comparison with the MPC methods.Die Dissertation wurde 2020 im Shaker-Verlag unter der ISBN 978-3-8440-7305-8 veröffentlicht.