Is the medial prefrontal cortex necessary for Theory of Mind? 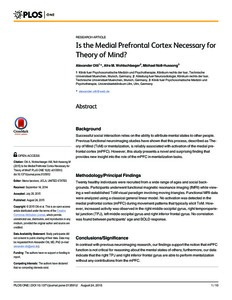 Background: Successful social interaction relies on the ability to attribute mental states to other people. Previous functional neuroimaging studies have shown that this process, described as Theory of Mind (ToM) or mentalization, is reliably associated with activation of the medial prefrontal cortex (mPFC). However, this study presents a novel and surprising finding that provides new insight into the role of the mPFC in mentalization tasks. Methodology/Principal Findings: Twenty healthy individuals were recruited from a wide range of ages and social backgrounds. Participants underwent functional magnetic resonance imaging (fMRI) while viewing a well-established ToM visual paradigm involving moving triangles. Functional MRI data were analyzed using a classical general linear model. No activation was detected in the medial prefrontal cortex (mPFC) during movement patterns that typically elicit ToM. However, increased activity was observed in the right middle occipital gyrus, right temporoparietal junction (TPJ), left middle occipital gyrus and right inferior frontal gyrus. No correlation was found between participants’ age and BOLD response. Conclusions/Significance: In contrast with previous neuroimaging research, our findings support the notion that mPFC function is not critical for reasoning about the mental states of others; furthermore, our data indicate that the right TPJ and right inferior frontal gyrus are able to perform mentalization without any contributions from the mPFC.