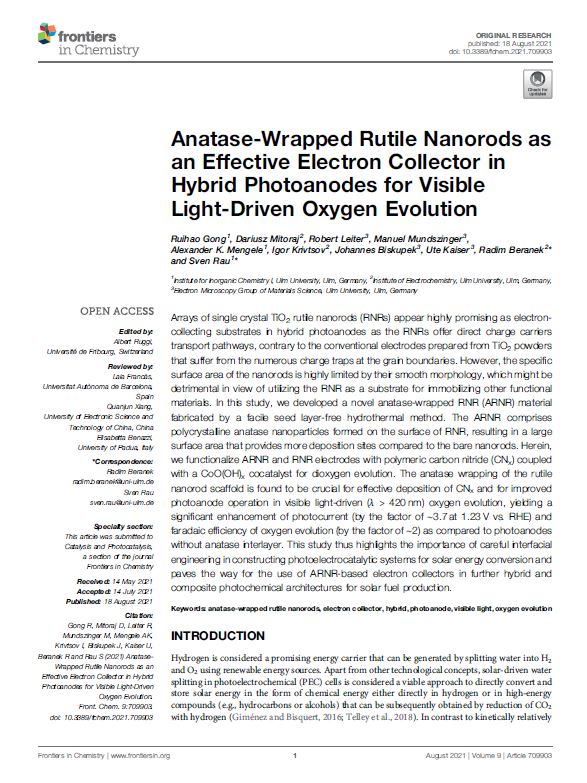 Arrays of single crystal TiO2 rutile nanorods (RNRs) appear highly promising as electroncollecting substrates in hybrid photoanodes as the RNRs offer direct charge carriers transport pathways, contrary to the conventional electrodes prepared from TiO2 powders that suffer from the numerous charge traps at the grain boundaries. However, the specific surface area of the nanorods is highly limited by their smooth morphology, which might be detrimental in view of utilizing the RNR as a substrate for immobilizing other functional materials. In this study, we developed a novel anatase-wrapped RNR (ARNR) material fabricated by a facile seed layer-free hydrothermal method. The ARNR comprises polycrystalline anatase nanoparticles formed on the surface of RNR, resulting in a large surface area that provides more deposition sites compared to the bare nanorods. Herein, we functionalize ARNR and RNR electrodes with polymeric carbon nitride (CNx) coupled with a CoO(OH)x cocatalyst for dioxygen evolution. The anatase wrapping of the rutile nanorod scaffold is found to be crucial for effective deposition of CNx and for improved photoanode operation in visible light-driven (λ > 420 nm) oxygen evolution, yielding a significant enhancement of photocurrent (by the factor of ∼3.7 at 1.23 V vs. RHE) and faradaic efficiency of oxygen evolution (by the factor of ∼2) as compared to photoanodes without anatase interlayer. This study thus highlights the importance of careful interfacial engineering in constructing photoelectrocatalytic systems for solar energy conversion and paves the way for the use of ARNR-based electron collectors in further hybrid and composite photochemical architectures for solar fuel production.