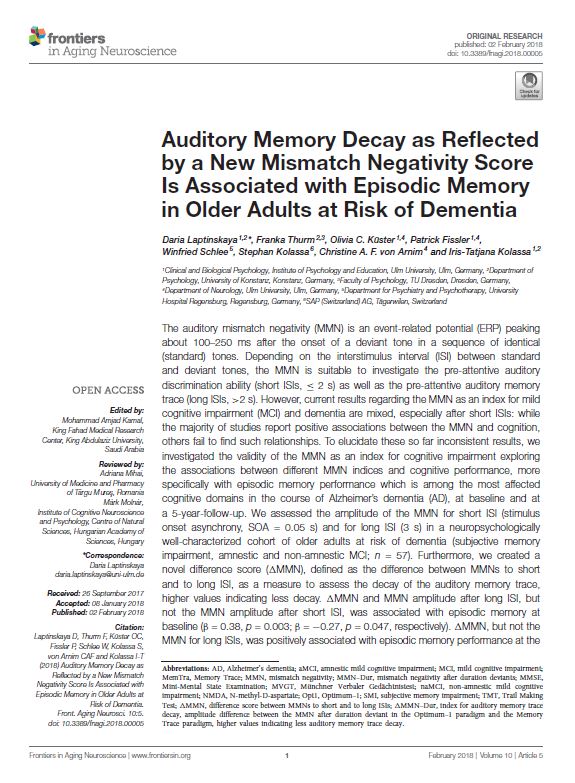 The auditory mismatch negativity (MMN) is an event-related potential (ERP) peaking about 100–250 ms after the onset of a deviant tone in a sequence of identical (standard) tones. Depending on the interstimulus interval (ISI) between standard and deviant tones, the MMN is suitable to investigate the pre-attentive auditory discrimination ability (short ISIs, ≤ 2 s) as well as the pre-attentive auditory memory trace (long ISIs, >2 s). However, current results regarding the MMN as an index for mild cognitive impairment (MCI) and dementia are mixed, especially after short ISIs: while the majority of studies report positive associations between the MMN and cognition, others fail to find such relationships. To elucidate these so far inconsistent results, we investigated the validity of the MMN as an index for cognitive impairment exploring the associations between different MMN indices and cognitive performance, more specifically with episodic memory performance which is among the most affected cognitive domains in the course of Alzheimer’s dementia (AD), at baseline and at a 5-year-follow-up. We assessed the amplitude of the MMN for short ISI (stimulus onset asynchrony, SOA = 0.05 s) and for long ISI (3 s) in a neuropsychologically well-characterized cohort of older adults at risk of dementia (subjective memory impairment, amnestic and non-amnestic MCI; n = 57). Furthermore, we created a novel difference score (ΔMMN), defined as the difference between MMNs to short and to long ISI, as a measure to assess the decay of the auditory memory trace, higher values indicating less decay. ΔMMN and MMN amplitude after long ISI, but not the MMN amplitude after short ISI, was associated with episodic memory at baseline (β = 0.38, p = 0.003; β = −0.27, p = 0.047, respectively). ΔMMN, but not the MMN for long ISIs, was positively associated with episodic memory performance at the 5-year-follow-up (β = 0.57, p = 0.013). The results suggest that the MMN after long ISI might be suitable as an indicator for the decline in episodic memory and indicate ΔMMN as a potential biomarker for memory impairment in older adults at risk of dementia.