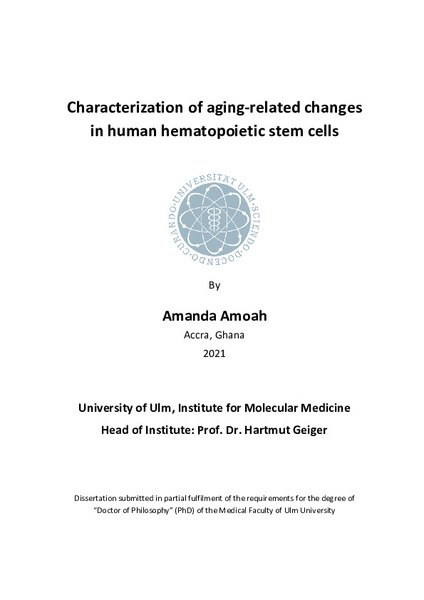 The continuous production of blood cells, maintained by hematopoietic stem cells, is vital to sustain life. With advancing age, hematopoietic stem cells undergo distinct age-related modifications that manifest as an increased risk of developing blood disorders and more severe infections. Over the years, mouse models have been extensively used as ideal tools for aging although the possibility of translation into humans has not been explicitly addressed. Here, guided by murine studies, aged human hematopoietic stem cells were characterized, focusing on intrinsic alterations, and a possible intervention for rejuvenation. Elderly donors present with increased frequencies of lineage negative cells and hematopoietic stem cells but a decreased proportion of multi-lymphoid progenitor cells. Also, they exhibit elevated levels of Cdc42 activity which correlate directly with stem cell numbers and inversely with polarity, similar to murine models. Consequently, the inhibition of Cdc42 activity in aged HSCs with a pharmacological molecule, CASIN, increased the percentage of Cdc42 polarized cells. The repolarization of aged stem cells is one feature of rejuvenation because polarity is essential in determining stem cell fate and function. Thus, by repolarizing aged hematopoietic stem cells, the likelihood of restoring its self-renewal-differentiation balance is also high. In ex vivo functional analyses, aged HSCs exhibit a delay in initiating division without changes to the rate of division, which is also as a result of elevated levels of Cdc42-GTP. Interestingly, in vivo analyses using non-conditioned NBSGW mice show elevated human chimerism coupled with a balanced differentiation in recipients of aged stem cells. This high chimerism was found to be driven by the increased activity of Cdc42 as recipients of aged HSCs treated with 10 μM CASIN, exhibit a xeno-chimeric profile similar to recipients of young HSCs. Altogether, my findings show a key role for Cdc42 activity-driven aging phenotypes and a potential for reversing these phenotypes.