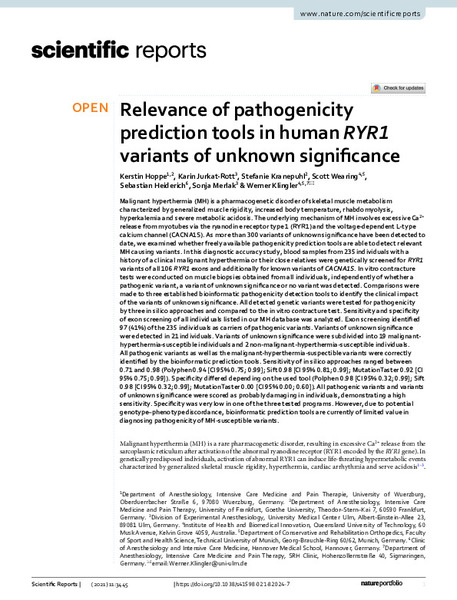 Malignant hyperthermia (MH) is a pharmacogenetic disorder of skeletal muscle metabolism characterized by generalized muscle rigidity, increased body temperature, rhabdomyolysis, hyperkalemia and severe metabolic acidosis. The underlying mechanism of MH involves excessive Ca2+ release from myotubes via the ryanodine receptor type 1 (RYR1) and the voltage-dependent L-type calcium channel (CACNA1S). As more than 300 variants of unknown significance have been detected to date, we examined whether freely available pathogenicity prediction tools are able to detect relevant MH causing variants. In this diagnostic accuracy study, blood samples from 235 individuals with a history of a clinical malignant hyperthermia or their close relatives were genetically screened for RYR1 variants of all 106 RYR1 exons and additionally for known variants of CACNA1S. In vitro contracture tests were conducted on muscle biopsies obtained from all individuals, independently of whether a pathogenic variant, a variant of unknown significance or no variant was detected. Comparisons were made to three established bioinformatic pathogenicity detection tools to identify the clinical impact of the variants of unknown significance. All detected genetic variants were tested for pathogenicity by three in silico approaches and compared to the in vitro contracture test. Sensitivity and specificity of exon screening of all individuals listed in our MH database was analyzed. Exon screening identified 97 (41%) of the 235 individuals as carriers of pathogenic variants. Variants of unknown significance were detected in 21 individuals. Variants of unknown significance were subdivided into 19 malignant-hyperthermia-susceptible individuals and 2 non-malignant-hyperthermia-susceptible individuals. All pathogenic variants as well as the malignant-hyperthermia-suspectible variants were correctly identified by the bioinformatic prediction tools. Sensitivity of in silico approaches ranged between 0.71 and 0.98 (Polyphen 0.94 [CI 95% 0.75; 0.99]; Sift 0.98 [CI 95% 0.81; 0.99]; MutationTaster 0.92 [CI 95% 0.75; 0.99]). Specificity differed depending on the used tool (Polphen 0.98 [CI 95% 0.32; 0.99]; Sift 0.98 [CI 95% 0.32; 0.99]; MutationTaster 0.00 [CI 95% 0.00; 0.60]). All pathogenic variants and variants of unknown significance were scored as probably damaging in individuals, demonstrating a high sensitivity. Specificity was very low in one of the three tested programs. However, due to potential genotype–phenotype discordance, bioinformatic prediction tools are currently of limited value in diagnosing pathogenicity of MH-susceptible variants.