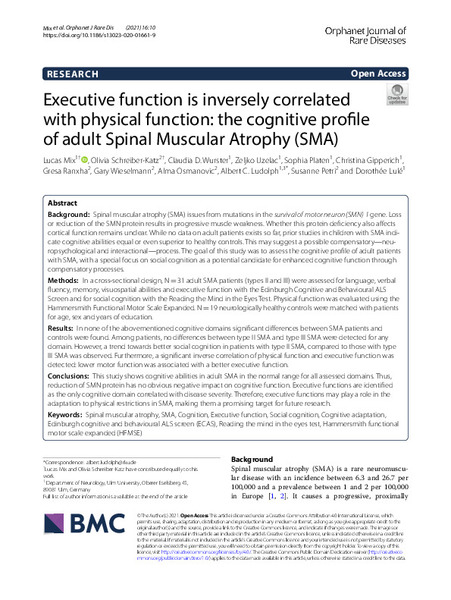 Background: Spinal muscular atrophy (SMA) issues from mutations in the survival of motor neuron (SMN) 1 gene. Loss or reduction of the SMN protein results in progressive muscle weakness. Whether this protein deficiency also affects cortical function remains unclear. While no data on adult patients exists so far, prior studies in children with SMA indicate cognitive abilities equal or even superior to healthy controls. This may suggest a possible compensatory—neuropsychological and interactional—process. The goal of this study was to assess the cognitive profile of adult patients with SMA, with a special focus on social cognition as a potential candidate for enhanced cognitive function through compensatory processes. Methods: In a cross-sectional design, N = 31 adult SMA patients (types II and III) were assessed for language, verbal fluency, memory, visuospatial abilities and executive function with the Edinburgh Cognitive and Behavioural ALS Screen and for social cognition with the Reading the Mind in the Eyes Test. Physical function was evaluated using the Hammersmith Functional Motor Scale Expanded. N = 19 neurologically healthy controls were matched with patients for age, sex and years of education. Results: In none of the abovementioned cognitive domains significant differences between SMA patients and controls were found. Among patients, no differences between type II SMA and type III SMA were detected for any domain. However, a trend towards better social cognition in patients with type II SMA, compared to those with type III SMA was observed. Furthermore, a significant inverse correlation of physical function and executive function was detected: lower motor function was associated with a better executive function. Conclusions: This study shows cognitive abilities in adult SMA in the normal range for all assessed domains. Thus, reduction of SMN protein has no obvious negative impact on cognitive function. Executive functions are identified as the only cognitive domain correlated with disease severity. Therefore, executive functions may play a role in the adaptation to physical restrictions in SMA, making them a promising target for future research.