Mechanisms and modifiers of energy metabolism in ALS and Huntington disease 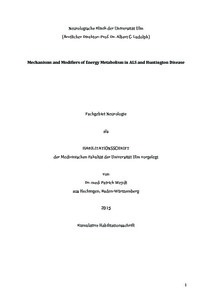 The present cumulative habilitation treatise summarizes my work on the metabolic underpinnings of neurodegenerative diseases. The work focuses on two paradigmatic neurodegenerative conditions, amyotrophic lateral sclerosis (ALS) and Huntington disease (HD). My overall goal was to exploit similarities and differences between HD and ALS to advance the understanding of neurodegeneration in general. The in vitro experiments, transgenic animal studies and human clinico-genetic studies described below led me to focus on dysregulation of the energy metabolism as a shared disease mechanism. A central finding of my thesis work is that in both conditions, HD and ALS the metabolic master switch PGC-1 alpha plays a pivotal role modifying disease progression and survival. This discovery directly and somewhat unexpectedly links transcriptional dysregulation and mitochondrial dysfunction, two aspects of neurodegeneration that were previously thought to be unrelated. As the disruption of the PGC-1 alpha pathway is recapitulated in transgenic model systems of both diseases, further research is possible (and necessary). This will help clarify the exact molecular mechanisms of metabolic dysregulation in neurodegeneration and thus contribute to defining new druggable therapeutic targets.