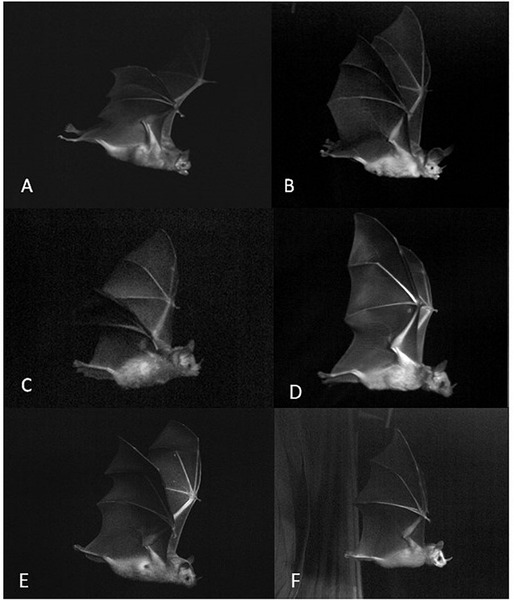 While phyllostomid bats show an impressive range of feeding habits, most of them emit highly similar echolocation calls. Due to the presence of an often prominent noseleaf, it has long been assumed that all phyllostomids emit echolocation calls exclusively through the nostrils rather than through the mouth. However, photo evidence documents also phyllostomid bats flying with an opened mouth. We hypothesized that all phyllostomid species emit echolocation calls only through the nostrils and therefore fly consistently with a closed mouth, and that observations of an open mouth should be a rare and random behavior among individuals and species. Using a high-speed camera and standardized conditions in a flight cage, we screened 40 phyllostomid species. Behavior varied distinctly among the species and mouth posture shows a significant phylogenetic signal. Bats of the frugivorous subfamilies Rhinophyllinae and Carolliinae, the nectarivorous subfamilies Glossophaginae and Lonchophyllinae, and the sanguivorous subfamily Desmodontinae all flew consistently with open mouths. So did the animalivorous subfamilies Glyphonycterinae, Micronycterinae and Phyllostominae, with the notable exception of species in the omnivorous genus Phyllostomus, which consistently flew with mouths closed. Bats from the frugivorous subfamily Stenodermatinae also flew exclusively with closed mouths with the single exception of the genus Sturnira, which is the sister clade to all other stenodermatine species. Further, head position angles differed significantly between bats echolocating with their mouth closed and those echolocating with their mouths opened, with closed-mouth phyllostomids pointing only the nostrils in the direction of flight and open-mouth phyllostomids pointing both the nostrils and mouth gape in the direction of flight. Ancestral trait reconstruction showed that the open mouth mode is the ancestral state within the Phyllostomidae. Based on the observed behavioral differences, we suggest that phyllostomid bats are not all nasal emitters as previously thought and discuss possible reasons. Further experiments, such as selectively obstructing sound emission through nostrils or mouth, respectively, will be necessary to clarify the actual source, plasticity and ecological relevance of sound emission of phyllostomid bats flying with their mouths open.