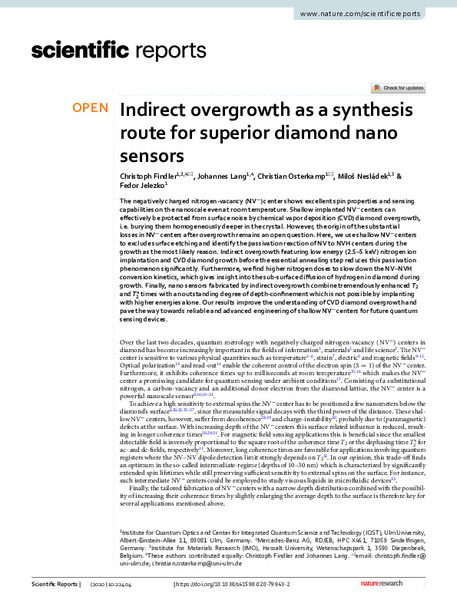 he negatively charged nitrogen-vacancy (NV−) center shows excellent spin properties and sensing capabilities on the nanoscale even at room temperature. Shallow implanted NV− centers can effectively be protected from surface noise by chemical vapor deposition (CVD) diamond overgrowth, i.e. burying them homogeneously deeper in the crystal. However, the origin of the substantial losses in NV− centers after overgrowth remains an open question. Here, we use shallow NV− centers to exclude surface etching and identify the passivation reaction of NV to NVH centers during the growth as the most likely reason. Indirect overgrowth featuring low energy (2.5–5 keV) nitrogen ion implantation and CVD diamond growth before the essential annealing step reduces this passivation phenomenon significantly. Furthermore, we find higher nitrogen doses to slow down the NV–NVH conversion kinetics, which gives insight into the sub-surface diffusion of hydrogen in diamond during growth. Finally, nano sensors fabricated by indirect overgrowth combine tremendously enhanced T2 and T∗2 times with an outstanding degree of depth-confinement which is not possible by implanting with higher energies alone. Our results improve the understanding of CVD diamond overgrowth and pave the way towards reliable and advanced engineering of shallow NV− centers for future quantum sensing devices.