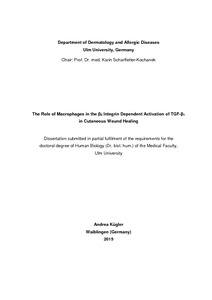 The members of the beta2 integrin family of leukocyte adhesion membrane molecules are key regulators of cell-cell and cell-matrix interactions during the inflammatory phase of cutaneous wound healing. Their importance becomes apparent in patients suffering from the leukocyte adhesion deficiency syndrome type 1 (LAD1) with spontaneous skin ulcerations and severe wound healing disturbances due to mutations in the CD18 gene encoding the common beta-chain of the beta2 integrins. CD18-/- mice closely mimic the impaired wound healing phenotype of human LAD1. Previous studies on this mouse model, performed by our laboratory, revealed beta2 integrins and their downstream signalling targets Syk, Vav3 and Rac2 to critically control the phagocytosis of apoptotic neutrophils (PMN) by macrophages with subsequent release of reactive oxygen species (ROS) and active transforming growth factor (TGF)-beta1 at wound sites and thus, normal wound healing. However, the molecular mechanism linking insufficient ROS release from macrophages and reduced activation of TGF-beta1 at wound sites in CD18 deficiency has not been deciphered so far. My PhD thesis addresses the question whether beta2 integrins on macrophages control ROS-dependent TGF-beta1 activation at wound sites and, if so, whether the NADPH oxidase NOX2, as the major source of ROS in phagocytes, is the downstream target of beta2 integrin signalling for the redox-mediated TGF-beta1 activation in wound healing.