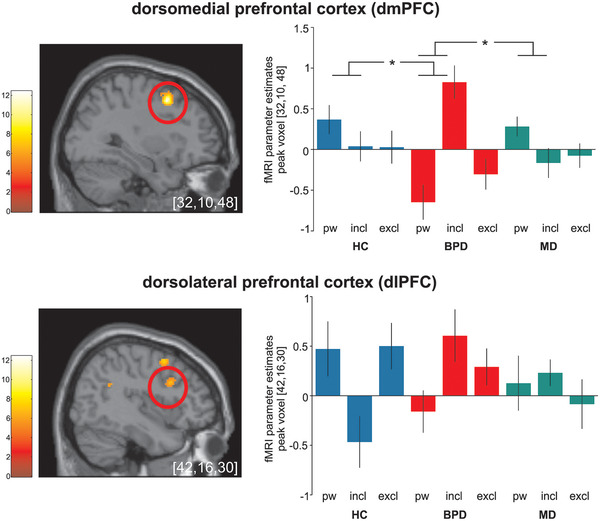 Humans engage in social interactions and have a fundamental need and motivation to establish and maintain social connections. Neuroimaging studies particularly focused on the neural substrates of social exclusion in healthy subjects (HC), borderline personality disorder (BPD), and major depression (MD). However, there is evidence regarding neural alterations also during social inclusion in BPD that we intended to elucidate in our study. Considering that patients with BPD often have comorbid MD, we investigated patients with BPD, and comorbid MD, patients with MD without BPD, and a sample of HC. By investigating these two clinical samples within one study design, we attempted to disentangle potential confounds arising by psychiatric disorder or medication and to relate neural alterations under social inclusion specifically to BPD. We investigated 48 females (15 BPD and MD, 16 MD, and 17 HC) aged between 18 and 40 years by fMRI (3T), using the established cyberball paradigm with social exclusion, inclusion, and passive watching conditions. Significant group-by-condition interaction effects (p < 0.05, FWE-corrected on cluster level) were observed within the dorsolateral (dlPFC) and dorsomedial prefrontal cortex (dmPFC), the temporo-parietal junction (TPJ), the posterior cingulate cortex (PCC), and the precuneus. Comparisons of estimated neural activations revealed that significant interaction effects were related to a relative increase in neural activations during social inclusion in BPD. In detail, we observed a significant increase in differential (social inclusion vs. passive watching) neural activation within the dmPFC and the PCC in BPD compared to both, MD and HC. However, significant interaction effects within the dlPFC and the TPJ could not specifically be linked to BPD considering that they did not differ significantly between the two clinical groups in post-hoc comparisons. Our study supports previous results on effects of social and inclusion in BPD, and provides further evidence regarding disorder specific neural alterations in BPD for brain regions associated with self-referential and mentalizing processes during social inclusion.