Lack of redundancy between electrophysiological measures of longrange neuronal communication 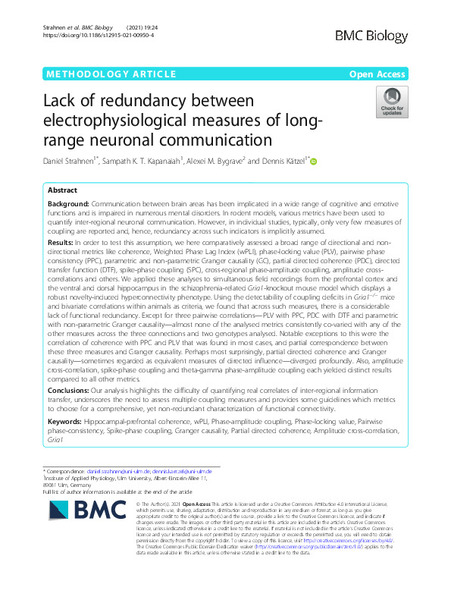 Background: Communication between brain areas has been implicated in a wide range of cognitive and emotive functions and is impaired in numerous mental disorders. In rodent models, various metrics have been used to quantify inter-regional neuronal communication. However, in individual studies, typically, only very few measures of coupling are reported and, hence, redundancy across such indicators is implicitly assumed. Results: In order to test this assumption, we here comparatively assessed a broad range of directional and nondirectional metrics like coherence, Weighted Phase Lag Index (wPLI), phase-locking value (PLV), pairwise phase consistency (PPC), parametric and non-parametric Granger causality (GC), partial directed coherence (PDC), directed transfer function (DTF), spike-phase coupling (SPC), cross-regional phase-amplitude coupling, amplitude crosscorrelations and others. We applied these analyses to simultaneous field recordings from the prefrontal cortex and the ventral and dorsal hippocampus in the schizophrenia-related Gria1-knockout mouse model which displays a robust novelty-induced hyperconnectivity phenotype. Using the detectability of coupling deficits in Gria1−/− mice and bivariate correlations within animals as criteria, we found that across such measures, there is a considerable lack of functional redundancy. Except for three pairwise correlations—PLV with PPC, PDC with DTF and parametric with non-parametric Granger causality—almost none of the analysed metrics consistently co-varied with any of the other measures across the three connections and two genotypes analysed. Notable exceptions to this were the correlation of coherence with PPC and PLV that was found in most cases, and partial correspondence between these three measures and Granger causality. Perhaps most surprisingly, partial directed coherence and Granger causality—sometimes regarded as equivalent measures of directed influence—diverged profoundly. Also, amplitude cross-correlation, spike-phase coupling and theta-gamma phase-amplitude coupling each yielded distinct results compared to all other metrics. Conclusions: Our analysis highlights the difficulty of quantifying real correlates of inter-regional information transfer, underscores the need to assess multiple coupling measures and provides some guidelines which metrics to choose for a comprehensive, yet non-redundant characterization of functional connectivity.