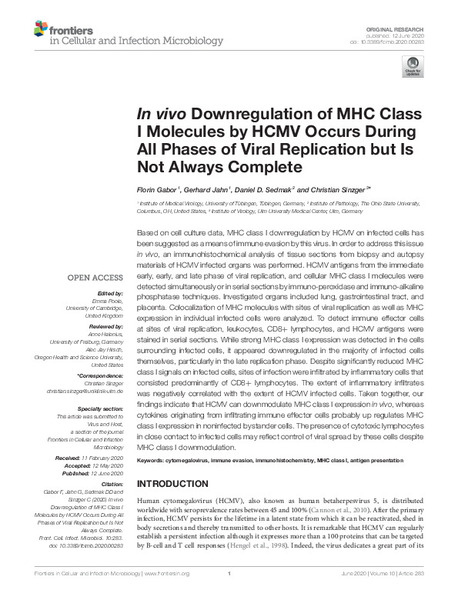 Based on cell culture data, MHC class I downregulation by HCMV on infected cells has been suggested as a means of immune evasion by this virus. In order to address this issue in vivo, an immunohistochemical analysis of tissue sections from biopsy and autopsy materials of HCMV infected organs was performed. HCMV antigens from the immediate early, early, and late phase of viral replication, and cellular MHC class I molecules were detected simultaneously or in serial sections by immuno-peroxidase and immuno-alkaline phosphatase techniques. Investigated organs included lung, gastrointestinal tract, and placenta. Colocalization of MHC molecules with sites of viral replication as well as MHC expression in individual infected cells were analyzed. To detect immune effector cells at sites of viral replication, leukocytes, CD8+ lymphocytes, and HCMV antigens were stained in serial sections. While strong MHC class I expression was detected in the cells surrounding infected cells, it appeared downregulated in the majority of infected cells themselves, particularly in the late replication phase. Despite significantly reduced MHC class I signals on infected cells, sites of infection were infiltrated by inflammatory cells that consisted predominantly of CD8+ lymphocytes. The extent of inflammatory infiltrates was negatively correlated with the extent of HCMV infected cells. Taken together, our findings indicate that HCMV can downmodulate MHC class I expression in vivo, whereas cytokines originating from infiltrating immune effector cells probably up regulates MHC class I expression in noninfected bystander cells. The presence of cytotoxic lymphocytes in close contact to infected cells may reflect control of viral spread by these cells despite MHC class I downmodulation.