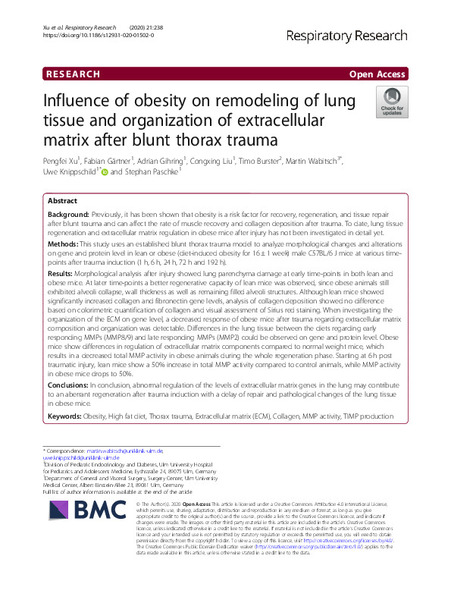 Background Previously, it has been shown that obesity is a risk factor for recovery, regeneration, and tissue repair after blunt trauma and can affect the rate of muscle recovery and collagen deposition after trauma. To date, lung tissue regeneration and extracellular matrix regulation in obese mice after injury has not been investigated in detail yet. Methods This study uses an established blunt thorax trauma model to analyze morphological changes and alterations on gene and protein level in lean or obese (diet-induced obesity for 16 ± 1 week) male C57BL/6 J mice at various time-points after trauma induction (1 h, 6 h, 24 h, 72 h and 192 h). Results Morphological analysis after injury showed lung parenchyma damage at early time-points in both lean and obese mice. At later time-points a better regenerative capacity of lean mice was observed, since obese animals still exhibited alveoli collapse, wall thickness as well as remaining filled alveoli structures. Although lean mice showed significantly increased collagen and fibronectin gene levels, analysis of collagen deposition showed no difference based on colorimetric quantification of collagen and visual assessment of Sirius red staining. When investigating the organization of the ECM on gene level, a decreased response of obese mice after trauma regarding extracellular matrix composition and organization was detectable. Differences in the lung tissue between the diets regarding early responding MMPs (MMP8/9) and late responding MMPs (MMP2) could be observed on gene and protein level. Obese mice show differences in regulation of extracellular matrix components compared to normal weight mice, which results in a decreased total MMP activity in obese animals during the whole regeneration phase. Starting at 6 h post traumatic injury, lean mice show a 50% increase in total MMP activity compared to control animals, while MMP activity in obese mice drops to 50%. Conclusions In conclusion, abnormal regulation of the levels of extracellular matrix genes in the lung may contribute to an aberrant regeneration after trauma induction with a delay of repair and pathological changes of the lung tissue in obese mice.