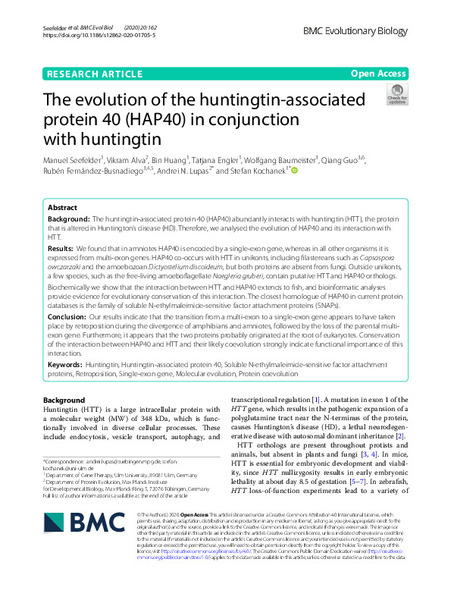 Background The huntingtin-associated protein 40 (HAP40) abundantly interacts with huntingtin (HTT), the protein that is altered in Huntington’s disease (HD). Therefore, we analysed the evolution of HAP40 and its interaction with HTT. Results We found that in amniotes HAP40 is encoded by a single-exon gene, whereas in all other organisms it is expressed from multi-exon genes. HAP40 co-occurs with HTT in unikonts, including filastereans such as Capsaspora owczarzaki and the amoebozoan Dictyostelium discoideum, but both proteins are absent from fungi. Outside unikonts, a few species, such as the free-living amoeboflagellate Naegleria gruberi, contain putative HTT and HAP40 orthologs. Biochemically we show that the interaction between HTT and HAP40 extends to fish, and bioinformatic analyses provide evidence for evolutionary conservation of this interaction. The closest homologue of HAP40 in current protein databases is the family of soluble N-ethylmaleimide-sensitive factor attachment proteins (SNAPs). Conclusion Our results indicate that the transition from a multi-exon to a single-exon gene appears to have taken place by retroposition during the divergence of amphibians and amniotes, followed by the loss of the parental multi-exon gene. Furthermore, it appears that the two proteins probably originated at the root of eukaryotes. Conservation of the interaction between HAP40 and HTT and their likely coevolution strongly indicate functional importance of this interaction.