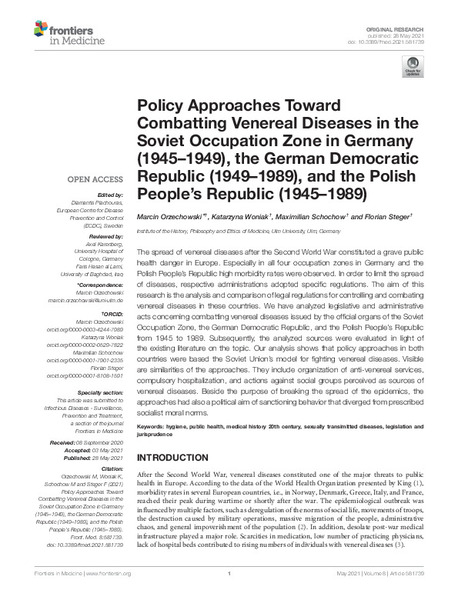 The spread of venereal diseases after the Second World War constituted a grave public health danger in Europe. Especially in all four occupation zones in Germany and the Polish People’s Republic high morbidity rates were observed. In order to limit the spread of diseases, respective administrations adopted specific regulations. The aim of this research is the analysis and comparison of legal regulations for controlling and combating venereal diseases in these countries. We have analyzed legislative and administrative acts concerning combatting venereal diseases issued by the official organs of the Soviet Occupation Zone, the German Democratic Republic, and the Polish People’s Republic from 1945 to 1989. Subsequently, the analyzed sources were evaluated in light of the existing literature on the topic. Our analysis shows that policy approaches in both countries were based the Soviet Union’s model for fighting venereal diseases. Visible are similarities of the approaches. They include organization of anti-venereal services, compulsory hospitalization, and actions against social groups perceived as sources of venereal diseases. Beside the purpose of breaking the spread of the epidemics, the approaches had also a political aimof sanctioning behavior that diverged fromprescribed socialist moral norms.