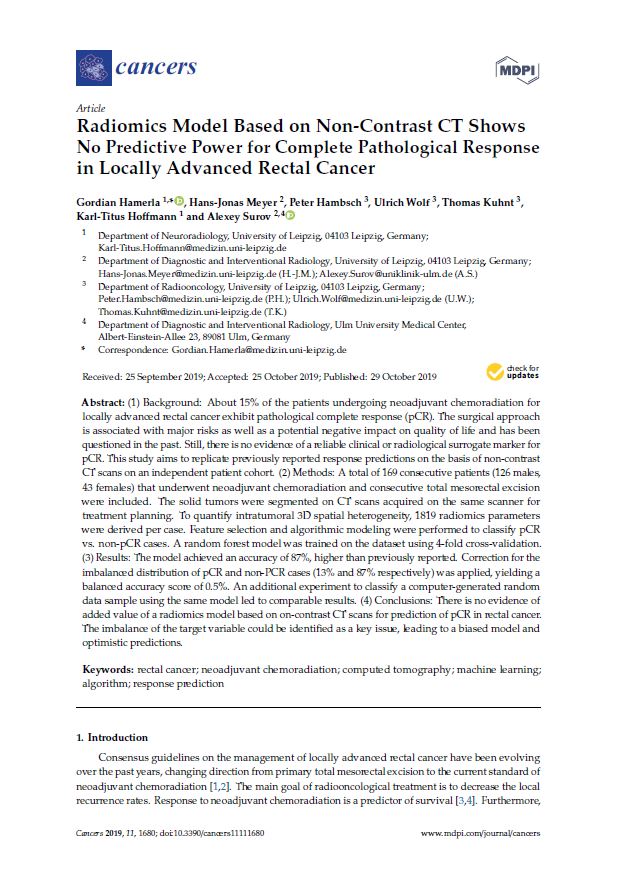 (1) Background: About 15% of the patients undergoing neoadjuvant chemoradiation for locally advanced rectal cancer exhibit pathological complete response (pCR). The surgical approach is associated with major risks as well as a potential negative impact on quality of life and has been questioned in the past. Still, there is no evidence of a reliable clinical or radiological surrogate marker for pCR. This study aims to replicate previously reported response predictions on the basis of non-contrast CT scans on an independent patient cohort. (2) Methods: A total of 169 consecutive patients (126 males, 43 females) that underwent neoadjuvant chemoradiation and consecutive total mesorectal excision were included. The solid tumors were segmented on CT scans acquired on the same scanner for treatment planning. To quantify intratumoral 3D spatial heterogeneity, 1819 radiomics parameters were derived per case. Feature selection and algorithmic modeling were performed to classify pCR vs. non-pCR cases. A random forest model was trained on the dataset using 4-fold cross-validation. (3) Results: The model achieved an accuracy of 87%, higher than previously reported. Correction for the imbalanced distribution of pCR and non-PCR cases (13% and 87% respectively) was applied, yielding a balanced accuracy score of 0.5%. An additional experiment to classify a computer-generated random data sample using the same model led to comparable results. (4) Conclusions: There is no evidence of added value of a radiomics model based on on-contrast CT scans for prediction of pCR in rectal cancer. The imbalance of the target variable could be identified as a key issue, leading to a biased model and optimistic predictions.