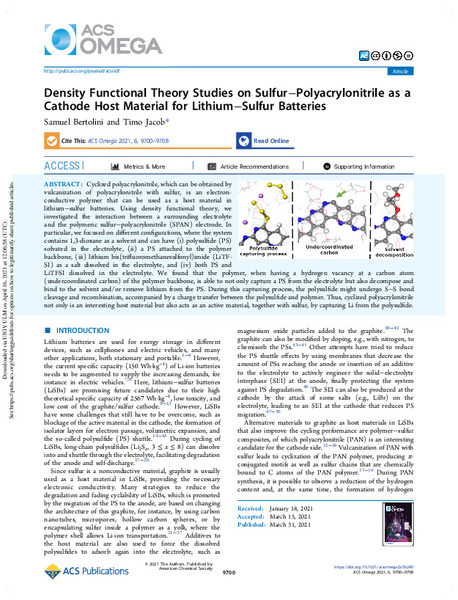 Cyclized polyacrylonitrile, which can be obtained by vulcanization of polyacrylonitrile with sulfur, is an electron-conductive polymer that can be used as a host material in lithium–sulfur batteries. Using density functional theory, we investigated the interaction between a surrounding electrolyte and the polymeric sulfur–polyacrylonitrile (SPAN) electrode. In particular, we focused on different configurations, where the system contains 1,3-dioxane as a solvent and can have (i) polysulfide (PS) solvated in the electrolyte, (ii) a PS attached to the polymer backbone, (iii) lithium bis(trifluoromethanesulfonyl)imide (LiTFSI) as a salt dissolved in the electrolyte, and (iv) both PS and LiTFSI dissolved in the electrolyte. We found that the polymer, when having a hydrogen vacancy at a carbon atom (undercoordinated carbon) of the polymer backbone, is able to not only capture a PS from the electrolyte but also decompose and bind to the solvent and/or remove lithium from the PS. During this capturing process, the polysulfide might undergo S–S bond cleavage and recombination, accompanied by a charge transfer between the polysulfide and polymer. Thus, cyclized polyacrylonitrile not only is an interesting host material but also acts as an active material, together with sulfur, by capturing Li from the polysulfide.