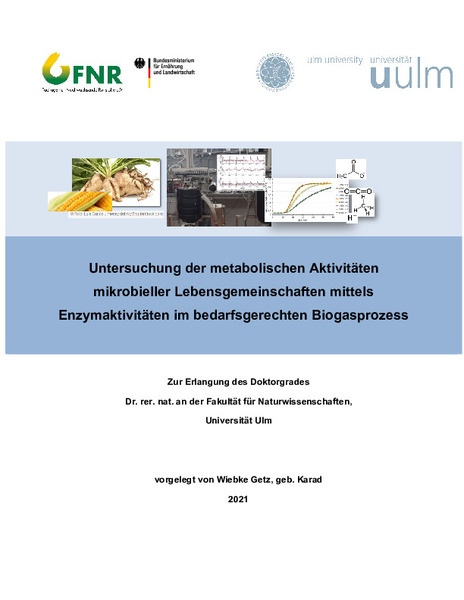 This work was created as part of the interdisciplinary joint project FLEXIZUCKER. Three different fermentation experiments for on-demand biogas production were carried out over several months in four independent, continuous 12 L fermenters by the Institute for Systemic Botany and Ecology under the direction of Prof. Dr. Marian Kazda performed. The aim of the work was to verify or refute the main hypothesis “The metabolic adaptability of microorganisms enables the needs-based biogas production from quickly available carbohydrates”. For this purpose, enzyme tests of glyceraldehyde-3-phosphate dehydrogenase (GAPDH), acetate kinase (ACK) and isocitrate dehydrogenase (IDH) were successfully established in the microtiter plate-based method (in 96-well plates in a 250 µL volume). Partial hypotheses formulated in 1.3 were investigated, whereby following statements finally could be made. Partial hypothesis 1 was successfully confirmed in the context of this doctoral thesis. In the different variants of the fermentation experiments it was shown that the microorganisms could metabolically adapt to the different substrate management. The substrate ratio of maize to sugar beet silage of 1:3 with a total volume of 2 kgDM m-3 d-1 and a volume of 1.5 kgDM m-3 d-1 maize and 2.0 kgDM m-3 d-1 sugar beet silage led to a significant (p<0.05) increase in ACK activities. It could thus be successfully shown that an increase in the substrate supply from a certain maize and sugar beet silage ratio/loading rate resulted in a significant increase in the amount of catalyst, which implied a high metabolic activity of the microorganisms. Furthermore, it could be shown that a maize to sugar beet silage ratio of 1:3 and a substrate amount of 1.5 kgDM m-3 d-1 maize and 2.0 kgDM m-3 d-1 sugar beet silage ultimately have a negative effect achieved methane yields and consequently on the methanogenic microorganisms. Partial hypothesis 2 was successfully verified. The microorganisms were able to react quickly to any intermittent addition of sugar beet silage. The amount of active catalyst showed no significant differences for the activities of GAPDH, ACK and IDH before the intermittent sugar beet silage feed (time t0), 10 min (time t1) and 2 to 4 h afterwards (time t2). As a result, there was always a sufficient amount of catalyst available to be able to convert all of the substrate directly, so that a metabolic adaptation to the needs-based biogas operation was successfully proven. No negative influence of the intermittent Z supply on the metabolic activities of the microorganisms could be determined. The microbial communities show considerable tolerances and potentials in terms of metabolic adaptability to variable substrate management regimes. Partial hypothesis 3 could be confirmed. The metabolic activity of the microbial community in different variants of a fermentation test was reflected in the corresponding methane production rates via an indirect connection. The determination of the statistical relationships between the process parameters (specific methane yield, pCO2) and the metabolic activities (measured via the ACK) enabled the successful analysis of the effects of needs-based biogas production. In the event of a process disruption, significant (p<0.01) correlations between ACK activities and pCO2 values (positive correlations, fermentation experiment 1: r = 0.81; fermentation experiment 3: r = 0.83), as well as specific methane yields (negative correlations, fermentation experiment 1: r = -0.77; fermentation experiment 3: r = -0.59). The connection was due to the higher substrate intake of the sugar beet silage, which led to increased ACK activity and the associated increased pCO2 values. The increased metabolism also increased the formation of organic acids, which influenced the pH value. Thus, it was successfully shown that the higher the Z content, the higher ACK activity and thus higher pCO2 values. This ultimately resulted in lower methane yields, so that there was an indirect connection between the process parameters. Ultimately, it could be shown that the on-demand biogas production from quickly available carbohydrates (sugar beet silage) is possible up to a certain amount of sugar beet silage due to the enzymatic and metabolic adaptability of the microorganisms. The working hypothesis "The metabolic adaptability of the microorganisms enables the on-demand production of biogas from quickly available carbohydrates" was thus successfully verified. Experiments on a laboratory scale were able to provide information on process biology in the biogas process. Knowledge of the metabolic activities of biogas microbiology can be seen as the key to a better understanding of on-demand biogas production and thus also to a technological optimization of biogas production.