The two kinds of free energy and the Bayesian revolution 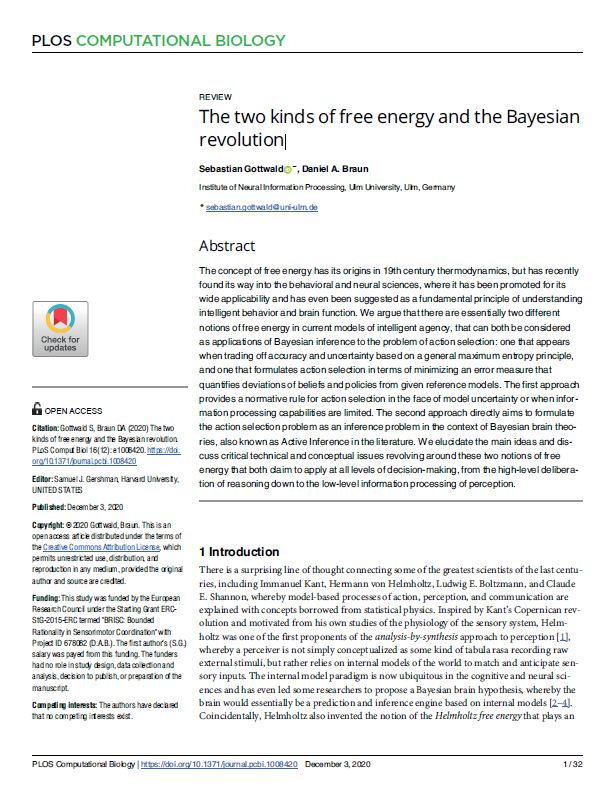 The concept of free energy has its origins in 19th century thermodynamics, but has recently found its way into the behavioral and neural sciences, where it has been promoted for its wide applicability and has even been suggested as a fundamental principle of understanding intelligent behavior and brain function. We argue that there are essentially two different notions of free energy in current models of intelligent agency, that can both be considered as applications of Bayesian inference to the problem of action selection: one that appears when trading off accuracy and uncertainty based on a general maximum entropy principle, and one that formulates action selection in terms of minimizing an error measure that quantifies deviations of beliefs and policies from given reference models. The first approach provides a normative rule for action selection in the face of model uncertainty or when information processing capabilities are limited. The second approach directly aims to formulate the action selection problem as an inference problem in the context of Bayesian brain theories, also known as Active Inference in the literature. We elucidate the main ideas and discuss critical technical and conceptual issues revolving around these two notions of free energy that both claim to apply at all levels of decision-making, from the high-level deliberation of reasoning down to the low-level information processing of perception.