Social diversity and access to healthcare in Europe: how does European Union’s legislation prevent from discrimination in healthcare? 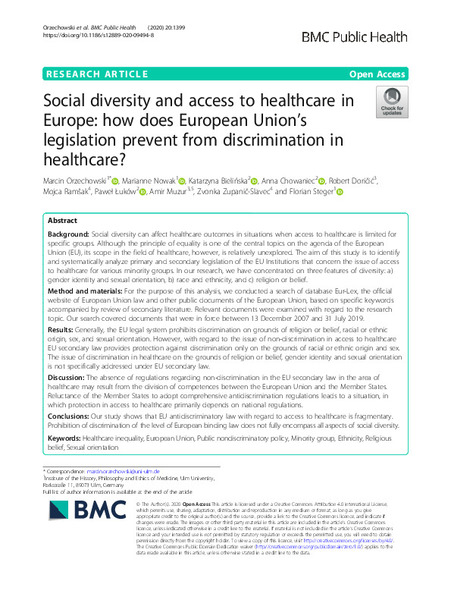 Background: Social diversity can affect healthcare outcomes in situations when access to healthcare is limited for specific groups. Although the principle of equality is one of the central topics on the agenda of the European Union (EU), its scope in the field of healthcare, however, is relatively unexplored. The aim of this study is to identify and systematically analyze primary and secondary legislation of the EU Institutions that concern the issue of access to healthcare for various minority groups. In our research, we have concentrated on three features of diversity: a) gender identity and sexual orientation, b) race and ethnicity, and c) religion or belief. Method and materials: For the purpose of this analysis, we conducted a search of database Eur-Lex, the official website of European Union law and other public documents of the European Union, based on specific keywords accompanied by review of secondary literature. Relevant documents were examined with regard to the research topic. Our search covered documents that were in force between 13 December 2007 and 31 July 2019. Results: Generally, the EU legal system prohibits discrimination on grounds of religion or belief, racial or ethnic origin, sex, and sexual orientation. However, with regard to the issue of non-discrimination in access to healthcare EU secondary law provides protection against discrimination only on the grounds of racial or ethnic origin and sex. The issue of discrimination in healthcare on the grounds of religion or belief, gender identity and sexual orientation is not specifically addressed under EU secondary law. Discussion: The absence of regulations regarding non-discrimination in the EU secondary law in the area of healthcare may result from the division of competences between the European Union and the Member States. Reluctance of the Member States to adopt comprehensive antidiscrimination regulations leads to a situation, in which protection in access to healthcare primarily depends on national regulations. Conclusions: Our study shows that EU antidiscriminatory law with regard to access to healthcare is fragmentary. Prohibition of discrimination of the level of European binding law does not fully encompass all aspects of social diversity.