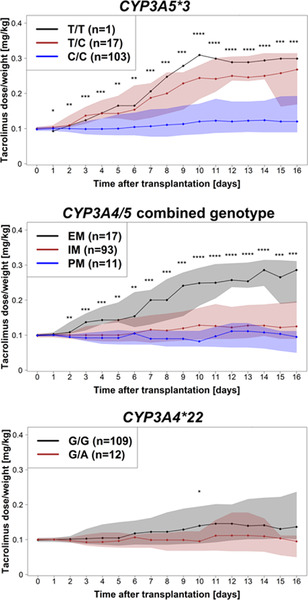 Background: Although there is evidence that the CYP3A4*22 variant should be considered in tacrolimus dosing in renal transplantation, its impact beyond tacrolimus dose requirements remains controversial. Methods: In a cohort of 121 kidney transplant recipients, we analyzed the CYP3A4*1B, CYP3A4*22, and CYP3A5*3 alleles and the ABCB1 variants 1236C>T, 2677G>T/A, and 3435C>T for their impact on exposure and dose requirement. Relevant clinical outcome measures such as acute rejection within the first year after transplantation, delayed graft function, and renal function at discharge (estimated glomerular filtration rate) were evaluated. Results: Extensive metabolizer (n = 17, CYP3A4*1/*1 carriers with at least one CYP3A5*1 allele) showed significantly higher tacrolimus dose requirement (P = 0.004) compared with both intermediate metabolizer (IM, n = 93, CYP3A5*3/*3 plus CYP3A4*1/*1 or CYP3A4*22 carriers plus one CYP3A5*1 allele), and poor metabolizer (n = 11, CYP3A4*22 allele in combination with CYP3A5*3/*3) after onset of therapy. Significantly higher dose requirement was observed in CYP3A5 expressers (P = 0.046) compared with non-expressers again at onset of therapy. Using the log additive genetic model, the area under the curve for the total observation period up to 16 days was significantly associated with the CYP3A5*3 genotype (P = 3.34 × 10-4) as well as with the IM or extensive metabolizer phenotype (P = 1.54 × 10-4), even after adjustment for multiple testing. Heterozygous carriers for CYP3A4*22 showed significantly higher areas under the curve than the CYP3A4*1/*1 genotype in the second week post-transplantation (adjusted P = 0.016). Regarding clinical outcomes, acute rejection was significantly associated with human leukocyte antigen mismatch (≥3 alleles; OR = 12.14, 95% CI 1.76, 525.21, P = 0.019 after correction for multiple testing). Graft recipients from deceased donors showed higher incidende of delayed graft function (OR 7.15, 95% CI 2.23, 30.46, adjusted P = 0.0008) and a lower estimated glomerular filtration rate at discharge (P = 0.0001). Tested CYP3A4 or CYP3A5 variants did not show any effects on clinical outcome parameters. ABCB1 variants did neither impact on pharmacokinetics nor on clinical endpoints. Conclusion: At our transplantation center, both CYP3A5*3 and, to a lesser extent, CYP3A4*22 affect tacrolimus pharmacokinetics early after onset of therapy with consequences for steady-state treatment in routine clinical practice.