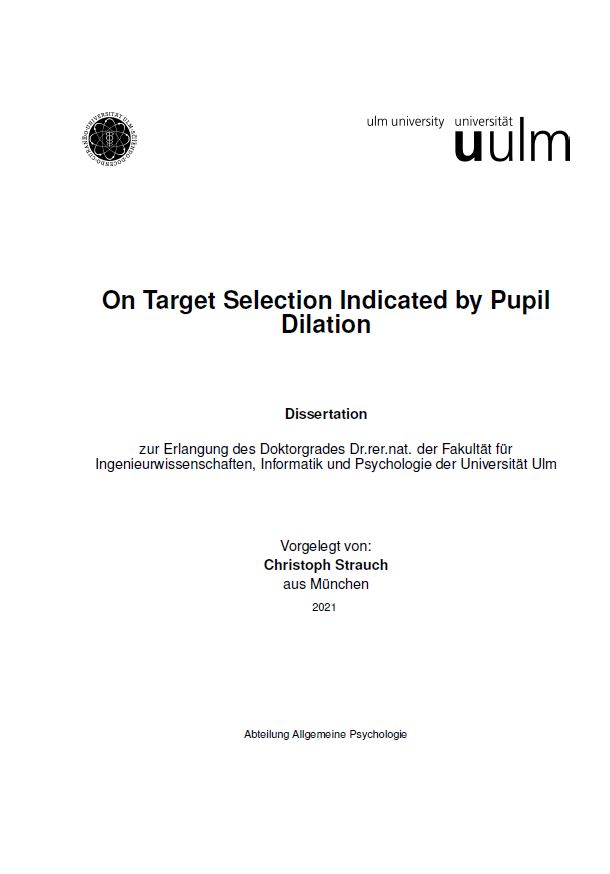 Pupils constantly change size, not only due to shifts in ﬁxation position or changes in illuminance, but also due to changes in arousal, as elicited by a broad number of cognitive processes. In this thesis, I present pupillometric research into the effects of a process that may be considered central for human information processing: the selection of stimuli. Related literature on perceptual decision-making and visual search suggests stronger pupil dilations for targets than distractors. And indeed, in previous works, we found pupils to dilate when ﬁxating a to be selected target in gaze-based human-computer interaction. Yet, observed effects might be attributed to exogenous factors affecting pupil dilation, such as changes in illuminance, or endogenous factors, such as varying stimulus valence. In this cumulative thesis I present results of a systematic investigation into selection using pupil dilation. Four of my original research works are completed with investigations and analyses that are reported in this thesis for the ﬁrst time. In two initial experiments, pupil dilation was found to be indicative of the repeated selection of letters. Stronger pupil dilations to targets than to distractors were robust to a number of exogenous factors affecting pupil dilation simultaneously, such as abrupt changes in illuminance. Extending the view to endogenous factors on pupil dilation, we found stronger pupillary responses when reading the own name compared to other names of low self-relevance, especially under inhibition. Taking an intermediate role between exogenously and endogenously triggered processes, differential stimulus probabilities (oddball effect) might explain a substantial part of differences in effect sizes reported for selection across existing research. Investigating the interplay of selection and stimulus probability, selection consistently let pupils dilate more for targets than distractors, whereas stimulus probability alone had no main effect on pupil dilation. However, there was an interaction: Pupils dilated more when targets were rare compared to being equiprobable or frequent. Previous investigations propose that task-relevance might be the decisive precondition for effects to emerge. Narrowing down this factor, results demonstrate that stimuli must not only be task-relevant for effects to unfold, but also goal-relevant to the beholder. Integrating these ﬁndings, I present a framework for effects of selection based on pupil data: Stimuli are classiﬁed as either goal-relevant or not. In a subsequent step that is lagged to the initial classiﬁcation, only goal-relevant stimuli are further evaluated regarding their relative importance or value. Results of an additional experiment, during which the consequence to errors in the paradigm was systematically varied, provide some tentative ﬁrst support for this notion. The synopsis of the here described results suggests that selection can be assumed to be an integral part of key concepts in cognitive psychology, such as visual search, emotion, and phenomena such as the oddball effect. Considering possible application scenarios in human-computer interaction, a ROC analysis shows that pupils indeed revealed which perceptually equal stimuli are selected and which are rejected above chance. Still, such classiﬁcation performances are - as of today - too low to allow pupil-based intent recognition alone, suggesting that other predictors would have to be integrated as well. However, selection has to be considered as central to how we as humans process information. The systematic analysis of pupil dilation therefore proves to be a useful method for not only investigating cognition and perception for basic research, but also for applications.