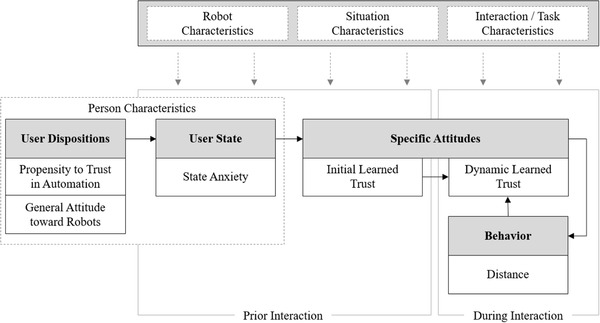 With service robots becoming more ubiquitous in social life, interaction design needs to adapt to novice users and the associated uncertainty in the first encounter with this technology in new emerging environments. Trust in robots is an essential psychological prerequisite to achieve safe and convenient cooperation between users and robots. This research focuses on psychological processes in which user dispositions and states affect trust in robots, which in turn is expected to impact the behavior and reactions in the interaction with robotic systems. In a laboratory experiment, the influence of propensity to trust in automation and negative attitudes toward robots on state anxiety, trust, and comfort distance toward a robot were explored. Participants were approached by a humanoid domestic robot two times and indicated their comfort distance and trust. The results favor the differentiation and interdependence of dispositional, initial, and dynamic learned trust layers. A mediation from the propensity to trust to initial learned trust by state anxiety provides an insight into the psychological processes through which personality traits might affect interindividual outcomes in human-robot interaction (HRI). The findings underline the meaningfulness of user characteristics as predictors for the initial approach to robots and the importance of considering users’ individual learning history regarding technology and robots in particular.