Increase in foreign body and harmful substance ingestion and associated complications in children: a retrospective study of 1199 cases from 2005 to 2017 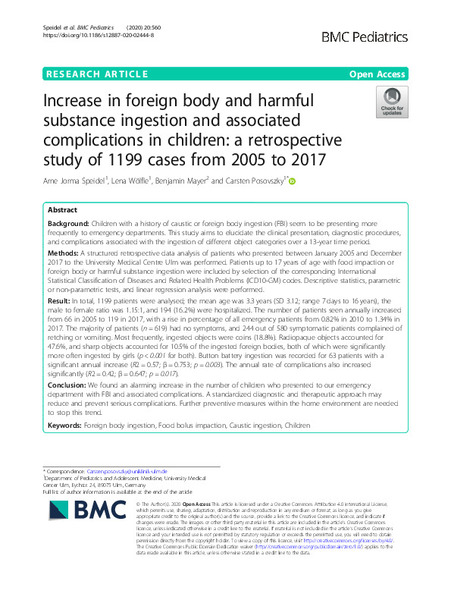 Background Children with a history of caustic or foreign body ingestion (FBI) seem to be presenting more frequently to emergency departments. This study aims to elucidate the clinical presentation, diagnostic procedures, and complications associated with the ingestion of different object categories over a 13-year time period. Methods A structured retrospective data analysis of patients who presented between January 2005 and December 2017 to the University Medical Centre Ulm was performed. Patients up to 17 years of age with food impaction or foreign body or harmful substance ingestion were included by selection of the corresponding International Statistical Classification of Diseases and Related Health Problems (ICD10-GM) codes. Descriptive statistics, parametric or non-parametric tests, and linear regression analysis were performed. Result In total, 1199 patients were analysed; the mean age was 3.3 years (SD 3.12; range 7 days to 16 years), the male to female ratio was 1.15:1, and 194 (16.2%) were hospitalized. The number of patients seen annually increased from 66 in 2005 to 119 in 2017, with a rise in percentage of all emergency patients from 0.82% in 2010 to 1.34% in 2017. The majority of patients (n = 619) had no symptoms, and 244 out of 580 symptomatic patients complained of retching or vomiting. Most frequently, ingested objects were coins (18.8%). Radiopaque objects accounted for 47.6%, and sharp objects accounted for 10.5% of the ingested foreign bodies, both of which were significantly more often ingested by girls (p < 0.001 for both). Button battery ingestion was recorded for 63 patients with a significant annual increase (R2 = 0.57; β = 0.753; p = 0.003). The annual rate of complications also increased significantly (R2 = 0.42; β = 0.647; p = 0.017). Conclusion We found an alarming increase in the number of children who presented to our emergency department with FBI and associated complications. A standardized diagnostic and therapeutic approach may reduce and prevent serious complications. Further preventive measures within the home environment are needed to stop this trend.