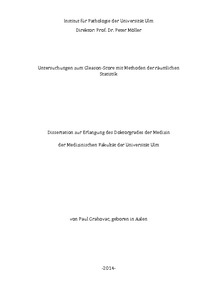 The Gleason score of a prostatic carcinoma is generally considered as one of the most important prognostic parameters of this tumour type. In the present study, it was attempted to study the relation between the Gleason score and objective data of spatial statistics, and to predict this score from such data. For this purpose, 25 T1 incidental prostatic carcinomas, 50 pT2N0, and 28 pT3N0 prostatic adenocarcinomas were characterized by a histological texture analysis based on principles of spatial statistics. On sectional images, progression from low grade to high grade prostatic cancer in terms of the Gleason score is correlated with complex changes of the epithelial cells and their lumina with respect to their area, boundary length and Euler number per unit area. The central finding was a highly significant negative correlation between the Gleason score and the Euler number of the epithelial cell phase per unit area. The Gleason score of all individual cases was predicted from the spatial statistical variables by multivariate linear regression. This approach means to perform a multiclass pattern recognition, as opposed to the usual problem of binary pattern recognition. A prediction was considered as acceptable when its deviation from the human classification was no more than 1 point. This was achieved in 79 of these 103 cases when only the Euler number density was used as predictor variable. The accuracy could be risen slightly to 84 of the 103 cases, when 7 input variables were used for prediction of the Gleason score, which means an accuracy of 81.5 %.