The effects of aging on hematopoietic stem cells 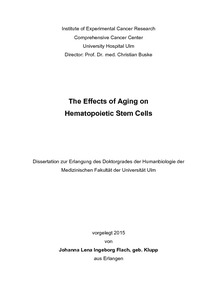 HSC are responsible for the life-long production of the blood, thereby making them one of the few blood cells that truly age. However, their functional activity declines with increasing age. While many drivers of HSC aging have been proposed, the exact molecular mechanisms why HSC function declines with age remain unknown. This work discovered that proliferating old HSCs have high levels of replication stress (RS) associated with accumulation of DNA damage and altered DNA replication fork dynamics. Microarray analysis revealed the RS features of old HSCs to be due to decreased expression of mini-chromosome maintenance components. It was also found that once old HSCs re-establish quiescence, residual RS at rDNA genes leads to the formation of nucleolar-associated GammaH2AX signals, which persist mainly due to ineffective de-phosphorylation of GammaH2AX by mis-localized PP4c phosphatase. Persistent nucleolar GammaH2AX also acts independently of marking DNA damage by transcriptional silencing rDNA genes, leading to decreased ribosome biogenesis in quiescent old HSCs. These findings suggest a novel, non-canonical function for GammaH2AX as an epigenetic silencing mark.