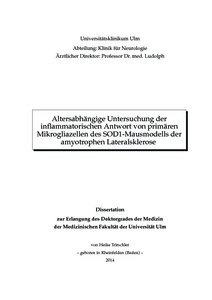 The amyotrophic lateral sclerosis (ALS) is a neurodegenerativ disease with no cell-autonomous origin. Resident innate immune cells in the brain, the microglia, were found to play an important part in the onset and progression of the disease. The aim of this work was to investigate whether microglia of SOD-1 transgenic mice react different to inflammatory stressors than microglia out of their healthy littermates. Furthermore the influence of age to the reaction to inflammatory stressors was examined. Therefore primary microglia cultures from newborn and adult mice were grown. Two different activation methods of the microglia were applied. The "classic-activation", as pro-inflammatory reaction, was induced by stimulation with LPS and the "alternative-activation, known to be rather anti-inflammatory, was induced by using IL-4 and LPS as activation agents. The cytokine IL-6 was quantified using an ELISA analysis to measure the activation level of the microglia after stimulation. The results showed significant differences of the IL-6 levels in the microglia of newborn compared to adult mice. Surprisingly the differences in the IL-6 levels of microglia grown from transgenic and compared to wild type mice was not significant. In this work no significant influence of the SOD-1 mutation on the inflammatory reaction of microglia could be shown. What was clearly seen was an increase of the inflammatory reaction of microglia towards pro- inflammatory activation caused by the age of the cells.