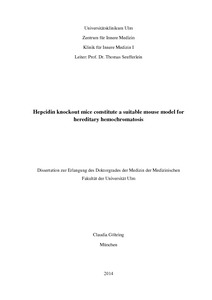 Iron is regulated via hepcidin, a hormone synthesized by hepatocytes. The exact mechanisms underlying iron hepatotoxicity as well as the factors modifying the progression of liver disease in iron overloaded subjects are only incompletely understood. To improve that, I analyzed hepcidin knockouts (KO) as a model of iron overload associated liver injury. Given the widespread epidemics of obesity, I also studied the combined influence of iron overload and a diet rich in saturated fatty acids (HF-diet). Hepcidin KO and wildtype (WT) mice were fed with iron-rich (Fe) and HF-diet alone or both diets in combination (Fe+HF) starting at one month of age. The iron metabolism as well as presence of liver injury was examined in six months old animals. Compared to other mouse models, male hepcidin KOs on Fe-diet displayed significantly elevated levels of hepatic iron and an activation of hepatic stellate cells but no liver fibrosis. Hepcidin KOs also developed liver injury with mild hepatic inflammation, hepatocellular apoptosis as well as elevated transaminases. Similarly to the human situation, male hepcidin KOs had a more pronounced hepatic iron overload than females. Hepcidin KOs exposed to Fe+HF-diet showed the highest hepatic iron overload and the highest ferritin serum levels. In agreement with that, hepcidin KOs on Fe+HF-diet presented with the most pronounced liver damage, an increased hepatic inflammation, elevated levels of apoptosis and even mild hepatic liver fibrosis. My data demonstrate that loss of hepcidin together with an exposure to Fe-diet is sufficient to induce hepatic injury, a finding that makes these mice an attractive tool to study the hepatotoxicity of iron overload. The observed additive hepatotoxic effect of iron overload and HF-diet meshes well with human studies that demonstrated a histological improvement in patients with nonalcoholic steatohepatitis, who were subjected to iron overload reducing treatment.