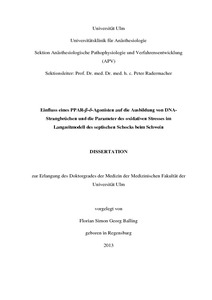 Objective: The effects of PPAR-beta-delta (Peroxisome Proliferator Activated Receptor-beta-delta) agonist GW0742 on DNA strand breaks and the parameters of oxidative stress in a long-term, porcine model of septic shock. Methods: 19 male pigs of the "FBM" (Familial hypercholesterolemia, Bretoncelles and Meishan) breed with pre-existing atherosclerosis were randomly separated into three groups. PPAR group received GW0742 six, 12 and 18 hours after induction of faecal peritonitis by inoculation of autologous faeces, Placebo group only received vehicle and a sham operated group was created to serve as comparison. At the start of the experiment and 24 hours later lymphocytes were isolated from animal blood and subjected to an additional source of oxidative stress, which was a two hour incubation in a compression chamber. DNA strand breaks were detected by comet assay, protein expressions of HO-1 and iNOS were detected by Western blot and Nitrotyrosin expression was detected by immunocytochemistry. Results: Each intervention, hyperbaric oxygenation and sepsis, seen individually caused DNA strand breaks and Nitrotyrosin expression, whereas hyperbaric oxygenation under septic conditions showed no additional effects. The PPAR-beta-delta-agonist GW0742 had no effect on DNA strand breaks. Western blot and immunocytochemistry produced similar results. Conclusion: Already established effects of hyperbaric oxygenation and sepsis on DNA strand breaks and the parameters of oxidative stress could be replicated in this thesis. Conspicuously, consequences induced by hyperbaric oxygenation under septic conditions and an effect of PPAR-beta-delta agonist GW0742 were absent. This could be caused by a higher oxidative stress level in "FBM" pigs resulting in a decreased number of PPAR-beta-delta.