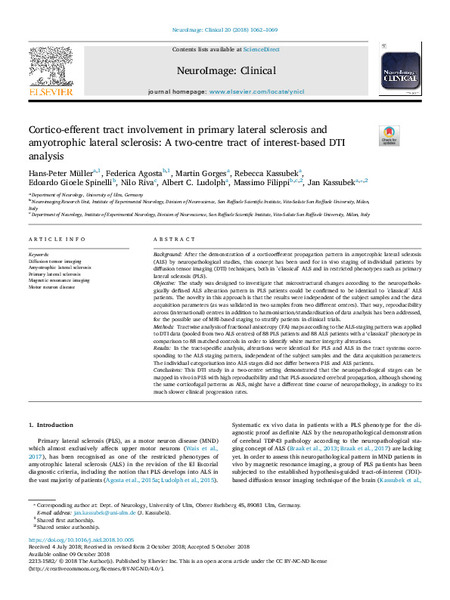 Background: After the demonstration of a corticoefferent propagation pattern in amyotrophic lateral sclerosis (ALS) by neuropathological studies, this concept has been used for in vivo staging of individual patients by diffusion tensor imaging (DTI) techniques, both in `classical` ALS and in restricted phenotypes such as primary lateral sclerosis (PLS). Objective: The study was designed to investigate that microstructural changes according to the neuropathologically defined ALS alteration pattern in PLS patients could be confirmed to be identical to ´classical´ ALS patients. The novelty in this approach is that the results were independent of the subject samples and the data acquisition parameters (as was validated in two samples from two different centres). That way, reproducibility across (international) centres in addition to harmonisation/standardisation of data analysis has been addressed, for the possible use of MRI-based staging to stratify patients in clinical trials. Methods: Tractwise analysis of fractional anisotropy (FA) maps according to the ALS-staging pattern was applied to DTI data (pooled from two ALS centres) of 88 PLS patients and 88 ALS patients with a ‘classical’ phenotype in comparison to 88 matched controls in order to identify white matter integrity alterations. Results: In the tract-specific analysis, alterations were identical for PLS and ALS in the tract systems corresponding to the ALS staging pattern, independent of the subject samples and the data acquisition parameters. The individual categorisation into ALS stages did not differ between PLS and ALS patients. Conclusions: This DTI study in a two-centre setting demonstrated that the neuropathological stages can be mapped in vivo in PLS with high reproducibility and that PLS-associated cerebral propagation, although showing the same corticofugal patterns as ALS, might have a different time course of neuropathology, in analogy to its much slower clinical progression rates.