Sensing phases of water via nitrogen-vacancy centres in diamond 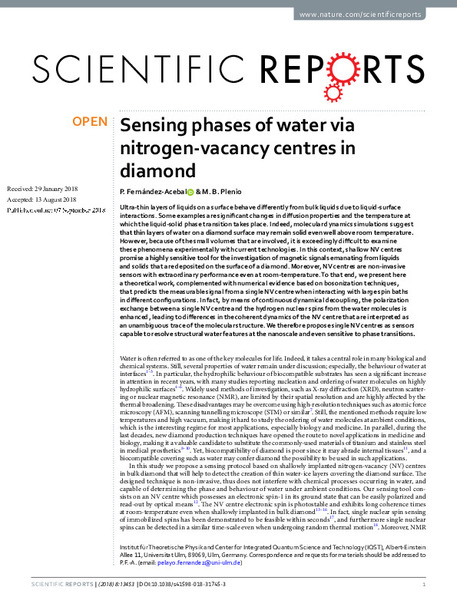 Ultra-thin layers of liquids on a surface behave differently from bulk liquids due to liquid-surface interactions. Some examples are significant changes in diffusion properties and the temperature at which the liquid-solid phase transition takes place. Indeed, molecular dynamics simulations suggest that thin layers of water on a diamond surface may remain solid even well above room temperature. However, because of the small volumes that are involved, it is exceedingly difficult to examine these phenomena experimentally with current technologies. In this context, shallow NV centres promise a highly sensitive tool for the investigation of magnetic signals emanating from liquids and solids that are deposited on the surface of a diamond. Moreover, NV centres are non-invasive sensors with extraordinary performance even at room-temperature. To that end, we present here a theoretical work, complemented with numerical evidence based on bosonization techniques, that predicts the measurable signal from a single NV centre when interacting with large spin baths in different configurations. In fact, by means of continuous dynamical decoupling, the polarization exchange between a single NV centre and the hydrogen nuclear spins from the water molecules is enhanced, leading to differences in the coherent dynamics of the NV centre that are interpreted as an unambiguous trace of the molecular structure. We therefore propose single NV centres as sensors capable to resolve structural water features at the nanoscale and even sensitive to phase transitions.