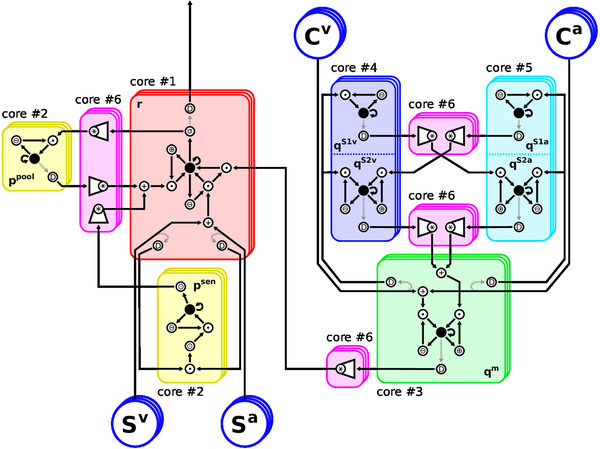 While interacting with the world our senses and nervous system are constantly challenged to identify the origin and coherence of sensory input signals of various intensities. This problem becomes apparent when stimuli from different modalities need to be combined, e.g., to find out whether an auditory stimulus and a visual stimulus belong to the same object. To cope with this problem, humans and most other animal species are equipped with complex neural circuits to enable fast and reliable combination of signals from various sensory organs. This multisensory integration starts in the brain stem to facilitate unconscious reflexes and continues on ascending pathways to cortical areas for further processing. To investigate the underlying mechanisms in detail, we developed a canonical neural network model for multisensory integration that resembles neurophysiological findings. For example, the model comprises multisensory integration neurons that receive excitatory and inhibitory inputs from unimodal auditory and visual neurons, respectively, as well as feedback from cortex. Such feedback projections facilitate multisensory response enhancement and lead to the commonly observed inverse effectiveness of neural activity in multisensory neurons. Two versions of the model are implemented, a rate-based neural network model for qualitative analysis and a variant that employs spiking neurons for deployment on a neuromorphic processing. This dual approach allows to create an evaluation environment with the ability to test model performances with real world inputs. As a platform for deployment we chose IBM's neurosynaptic chip TrueNorth. Behavioral studies in humans indicate that temporal and spatial offsets as well as reliability of stimuli are critical parameters for integrating signals from different modalities. The model reproduces such behavior in experiments with different sets of stimuli. In particular, model performance for stimuli with varying spatial offset is tested. In addition, we demonstrate that due to the emergent properties of network dynamics model performance is close to optimal Bayesian inference for integration of multimodal sensory signals. Furthermore, the implementation of the model on a neuromorphic processing chip enables a complete neuromorphic processing cascade from sensory perception to multisensory integration and the evaluation of model performance for real world inputs.