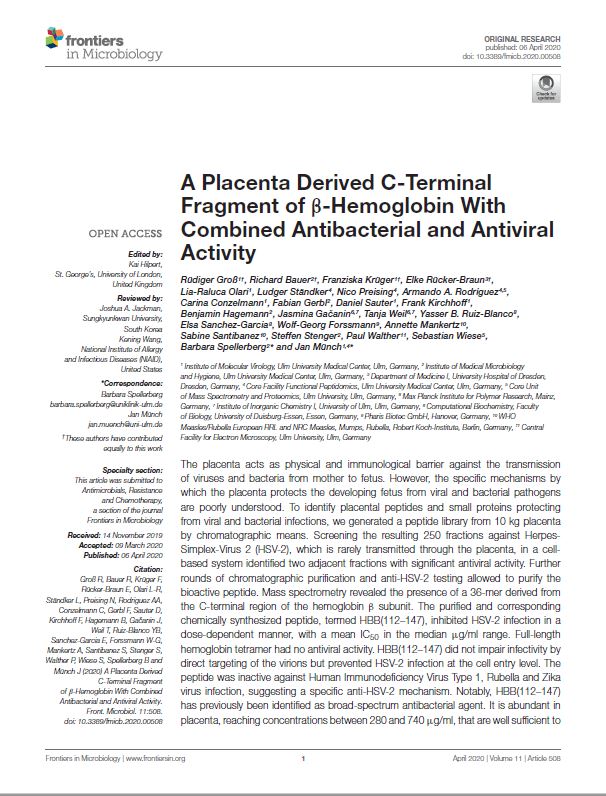 The placenta acts as physical and immunological barrier against the transmission of viruses and bacteria from mother to fetus. However, the specific mechanisms by which the placenta protects the developing fetus from viral and bacterial pathogens are poorly understood. To identify placental peptides and small proteins protecting from viral and bacterial infections, we generated a peptide library from 10 kg placenta by chromatographic means. Screening the resulting 250 fractions against Herpes-Simplex-Virus 2 (HSV-2), which is rarely transmitted through the placenta, in a cell-based system identified two adjacent fractions with significant antiviral activity. Further rounds of chromatographic purification and anti-HSV-2 testing allowed to purify the bioactive peptide. Mass spectrometry revealed the presence of a 36-mer derived from the C-terminal region of the hemoglobin β subunit. The purified and corresponding chemically synthesized peptide, termed HBB(112–147), inhibited HSV-2 infection in a dose-dependent manner, with a mean IC50 in the median μg/ml range. Full-length hemoglobin tetramer had no antiviral activity. HBB(112–147) did not impair infectivity by direct targeting of the virions but prevented HSV-2 infection at the cell entry level. The peptide was inactive against Human Immunodeficiency Virus Type 1, Rubella and Zika virus infection, suggesting a specific anti-HSV-2 mechanism. Notably, HBB(112–147) has previously been identified as broad-spectrum antibacterial agent. It is abundant in placenta, reaching concentrations between 280 and 740 μg/ml, that are well sufficient to inhibit HSV-2 and prototype Gram-positive and -negative bacteria. We here additionally show, that HBB(112–147) also acts potently against Pseudomonas aeruginosa strains (including a multi-drug resistant strain) in a dose dependent manner, while full-length hemoglobin is inactive. Interestingly, the antibacterial activity of HBB(112–147) was increased under acidic conditions, a hallmark of infection and inflammatory conditions. Indeed, we found that HBB(112–147) is released from the hemoglobin precursor by Cathepsin D and Napsin A, acidic proteases highly expressed in placental and other tissues. We propose that upon viral or bacterial infection, the abundant hemoglobin precursor is proteolytically processed to release HBB(112–147), a broadly active antimicrobial innate immune defense peptide.