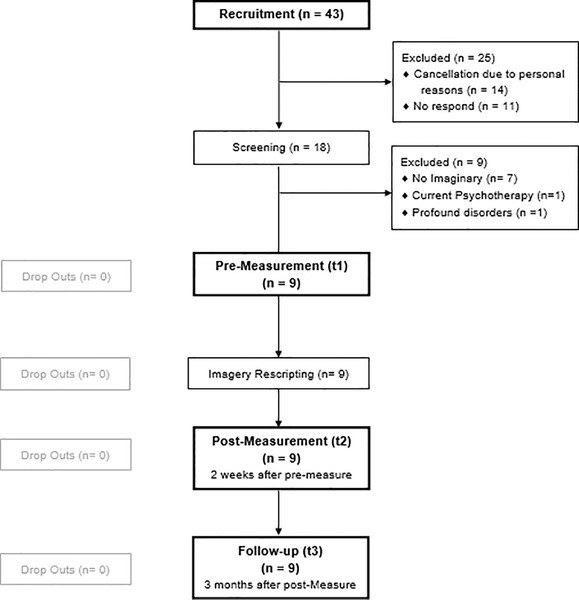 Background Test anxiety is common in university students. Demanding schedules may contribute to the relatively low utilization of professional counseling, when compared to other anxiety disorders. A possible solution could be a psychotherapeutic short-term intervention. The present exploratory study implemented a short-term psychotherapeutic treatment, consisting of two imagery rescripting (IR) sessions. The efficacy of IR techniques has already been demonstrated in the treatment of various anxiety disorders including test anxiety. Methods Nine students suffering from test anxiety (m = 3, f = 6) underwent two weekly applied sessions of IR. Outcome variables were examined one week prior to (t1), immediately after (t2) and three months after (t3) the intervention, using self-evaluation questionnaires on test anxiety (PAF), depressive symptoms (BDI II), life satisfaction (FLZ), general self-efficacy and study-specific self-efficacy (WIRKALL; WIRK_STUD), intrusiveness of mental images (IFES), and change and acceptance (VEV; ZUF; BFTB). Results There were no dropouts. According to results from ZUF and BFTB, the participants where highly satisfied with the intervention. PAF scores decreased significantly over time (t1 to t3), whereas WIRKALL scores (t1 to t3) and WIRK_STUD scores (t1 to t3 and t2 to t3) increased significantly. IFES scores decreased immediately after the intervention (t1 compared to t2) and further after the follow-up (t1 to t3). No changes in BDI-II scores were observed. Discussion The findings indicate a high acceptance and efficacy of the two-session IR-intervention. Limits are the lack of a control group, and the small sample size. Further evaluation in future controlled studies is needed.