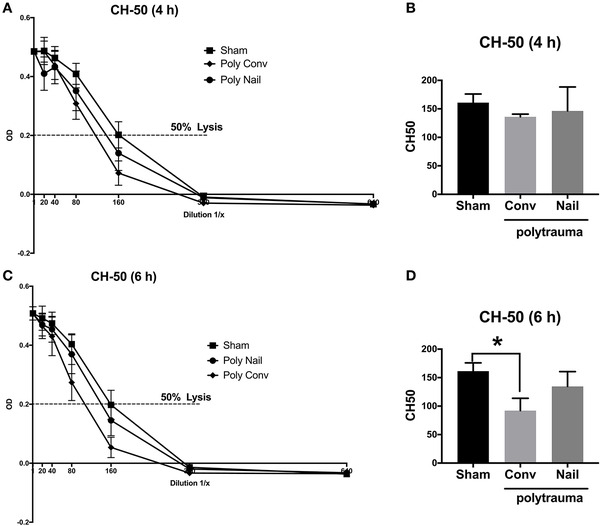 Background: The complement system is part of the innate immunity, is activated immediately after trauma and is associated with adult respiratory distress syndrome, acute lung injury, multiple organ failure, and with death of multiply injured patients. The aim of the study was to investigate the complement activation in multiply injured pigs as well as its effects on the heart in vivo and in vitro. Moreover, the impact of reamed vs. non-reamed intramedullary nailing was examined with regard to the complement activation after multiple trauma in pigs. Materials and Methods: Male pigs received multiple trauma, followed by femoral nailing with/without prior conventional reaming. Systemic complement hemolytic activity (CH-50 and AH-50) as well as the local cardiac expression of C3a receptor, C5a receptors1/2, and the deposition of the fragments C3b/iC3b/C3c was determined in vivo after trauma. Human cardiomyocytes were exposed to C3a or C5a and analyzed regarding calcium signaling and mitochondrial respiration. Results: Systemic complement activation increased within 6 h after trauma and was mediated via the classical and the alternative pathway. Furthermore, complement activation correlated with invasiveness of fracture treatment. The expression of receptors for complement activation were altered locally in vivo in left ventricles. C3a and C5a acted detrimentally on human cardiomyocytes by affecting their functionality and their mitochondrial respiration in vitro. Conclusion: After multiple trauma, an early activation of the complement system is triggered, affecting the heart in vivo as well as in vitro, leading to complement-induced cardiac dysfunction. The intensity of complement activation after multiple trauma might correlate with the invasiveness of fracture treatment. Reaming of the femoral canal might contribute to an enhanced “second hit” response after trauma. Consequently, the choice of fracture treatment might imply the clinical outcome of the critically injured patients and might be therefore crucial for their survival.