Literacy training of Kindergarten children with pencil, keyboard or tablet stylus: the influence of the writing tool on reading and writing performance at the letter and word level 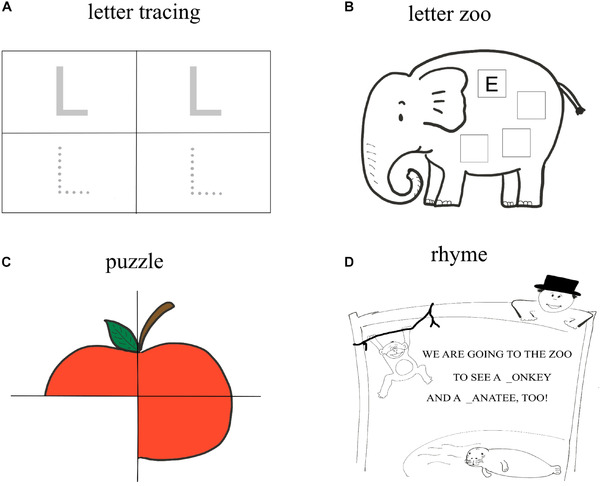 During the last years, digital writing devices are increasingly replacing handwriting with pencil and paper. As reading and writing skills are central for education, it is important to know, which writing tool is optimal for initial literacy education. The present training study was therefore set up to test the influence of the writing tool on the acquisition of literacy skills at the letter and word level with various tests in a large sample of kindergarten children (n = 147). Using closely matched letter learning games, children were trained with 16 letters by handwriting with a pencil on a sheet of paper, by writing with a stylus on a tablet computer, or by typing letters using a virtual keyboard on a tablet across 7 weeks. Training using a stylus on a touchscreen is an interesting comparison condition for traditional handwriting, because the slippery surface of a touchscreen has lower friction than paper and thus increases difficulty of motor control. Before training, immediately after training and four to five weeks after training, we assessed reading and writing performance using standardized tests. We also assessed visuo-spatial skills before and after training, in order to test, whether the different training regimens affected cognitive domains other than written language. Children of the pencil group showed superior performance in letter recognition and improved visuo-spatial skills compared with keyboard training. The performance of the stylus group did not differ significantly neither from the keyboard nor from the pencil group. Keyboard training, however, resulted in superior performance in word writing and reading compared with handwriting training with a stylus on the tablet, but not compared with the pencil group. Our results suggest that handwriting with pencil fosters acquisition of letter knowledge and improves visuo-spatial skills compared with keyboarding. At least given the current technological state, writing with a stylus on a touchscreen seems to be the least favorable writing tool, possibly because of increased demands on motor control. Future training studies covering a more extended observation period over years are needed to allow conclusions about long-term effects of writing tools on literacy acquisition as well as on general cognitive development.