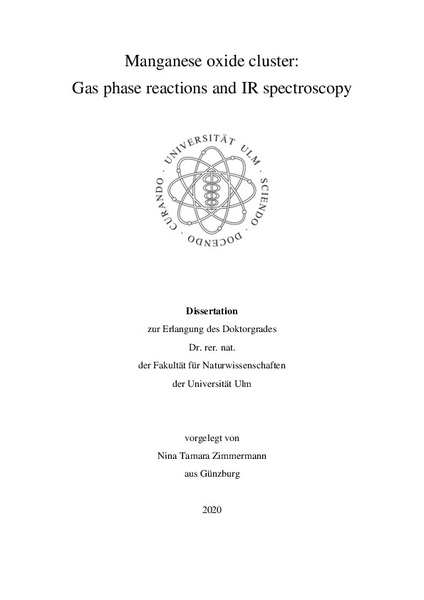 A manganese oxide cube represents the center of the oxygen evolving complex of the Photosystem II. It is the key component of the water splitting process to produce oxygen and H+-ions. The hydrogen ions get transferred to the lumen of the plant, whereby a proton gradient is generated, meaning a difference in concentration of H+ ions in the lumen and the stroma. The proton gradient drives the ATP synthesis, a reductive conversion of ADP to ATP. For the industrial use, the reductive conversion should take place to form H2 from the H+-ions. Molecular hydrogen is a clean and efficient energy carrier and became of great interest in the scientific community in the last three decades. Ever since, the artificial water splitting has been studied in detail. The biological complex consists of a CaMn4O5 metal core that is surrounded by an intricate amino acid structure. In order to simplify the experimental approach, the modelsystem MnxOy+ has been implemented. In this work various compositions of stoichiometric (MnxOy; x=y) and mainly higher oxidized (MnxOy; x<y) cationic manganese oxide clusters have been investigated via gas phase reaction kinetic measurements in an ion trap and infrared multiphoton dissociation spectroscopy. First of all, the structures of bare cationic manganese oxide clusters have been determined in an infrared multiphoton dissociation set up. Binding trends for additional oxygen atoms could be identified due to the specific vibrational modes of bridged and terminal oxygen atoms and molecularly bound oxygen. Subsequently, the reaction behavior of the manganese oxide clusters towards D2O was studied in a gas phase reaction kinetics set up by recording mass spectra in an octopole ion trap. It has been distinguished between complexes with two (dimeric), three (trimeric) and four (tetrameric) manganese atoms and multiple oxygen atoms. The experimental data showed that each dimeric cluster composition splits water by releasing hydrogen peroxide and binding D2 at the cluster core. In contrast, the trimeric series adsorbed water, but did not proceed any further reaction, independent of the number of oxygen atoms in the complex. Special findings have been made with the tetrameric cluster ions. The complexes with an odd number of oxygen atoms showed a water splitting process, like seen for the dimeric series, by releasing hydrogen peroxide and binding deuterium to the cluster ion. In order to support the suggested water splitting mechanism with D2 remaining at the cluster core, deuterium and hydrogen adsorption experiments have been performed. Experimental data were collected in the gas phase reaction kinetics set up to detect reaction product mass spectra and in the infrared multiphoton dissociation set up to get structural information. Each studied cluster composition adsorbed hydrogen/deuterium molecularly. Apart from studies of the water splitting reaction, the CO2 activation at cationic manganese oxide clusters has been investigated in order to address the environmental problems caused by CO2 emission. The measurements with the infrared multiphoton dissociation set up proved an adsorption of carbon dioxide at the cluster ions due to the appearance and detection of the characteristic CO2 Fermi dyad. An activation of the carbon dioxide molecule could not be shown. The final part of this work aimed at the conversion of acetic acid which represents the main byproduct in the pyrolysis of biomass to generate bio-oil. It has been shown that [Mn4O4]+ is a capable catalyst to convert acetic acid into methane, CO2, ketene, acetone and water.