Social networks use disorder and associations with depression and anxiety symptoms: a systematic review of recent research in China 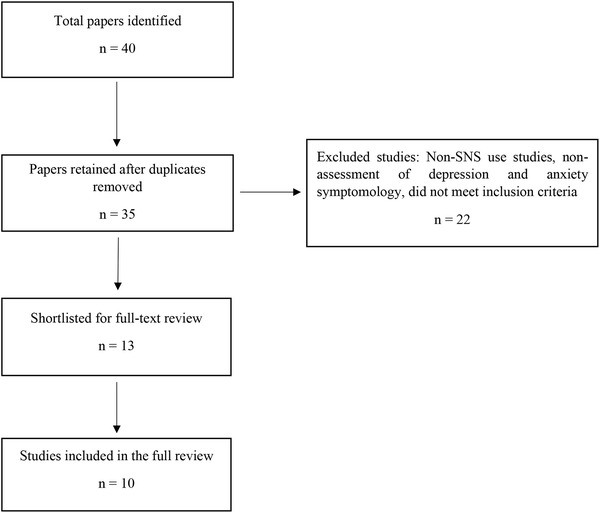 Background: An increasing number of studies have investigated Social Networks Use Disorder (SNUD) among Western samples. In this context, the investigation of SNUD in Asia and especially in China has been much neglected. This poses a gap in the literature; it has been estimated that more than one billion Chinese people are using Chinese social networking sites (SNSs). Of note, many of these Chinese SNSs are rather unknown to researchers in Western countries. Aims: The primary objective of the present systematic review was to identify and evaluate studies that investigated Chinese SNS use and associations between SNUD and depression and anxiety symptoms. Method: A comprehensive search strategy identified relevant studies in PsycINFO, PsycARTICLES, Psychology and Behavioral Sciences Collection, MEDLINE, ProQuest, Web of Science, PubMed, Google Scholar, and the Chinese National Knowledge Infrastructure database (CNKI). Results: The search strategy identified 35 potential studies, 13 studies were identified after shortlisting and full-text reviews of the studies, and finally 10 studies were included in the full review. Associations between SNUD, depression, and anxiety were reported in 10 studies. In eight (of the 10) studies, symptom severity of SNUD was associated with depression. Four studies reported associations between SNUD and anxiety. Most studies had utilized cross-sectional survey designs. Conclusions: Most associations were found between SNUD and depression symptoms, but effect sizes were higher between SNUD and anxiety symptoms. The results have the potential to inform prevention and interventions on SNUD in Eastern cultures, although we explicitly state that our work focuses on China, the transfer of the present observations to other Asian countries (and their cultures) still needs to be established.