A trapped-ion simulator for spin-boson models with structured environments 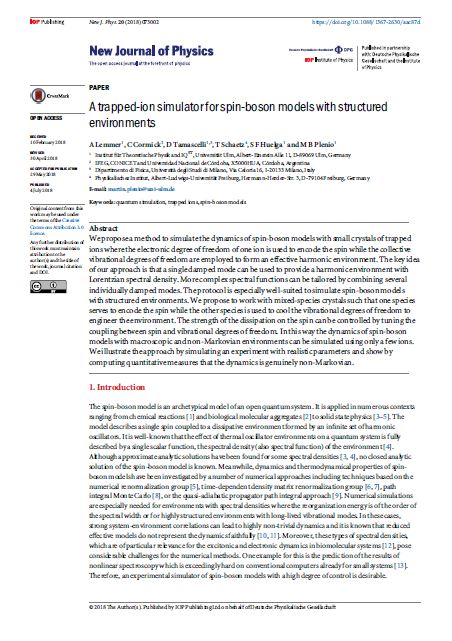 We propose a method to simulate the dynamics of spin-boson models with small crystals of trapped ions where the electronic degree of freedom of one ion is used to encode the spin while the collective vibrational degrees of freedom are employed to form an effective harmonic environment. The key idea of our approach is that a single damped mode can be used to provide a harmonic environment with Lorentzian spectral density. More complex spectral functions can be tailored by combining several individually damped modes. The protocol is especially well-suited to simulate spin-boson models with structured environments. We propose to work with mixed-species crystals such that one species serves to encode the spin while the other species is used to cool the vibrational degrees of freedom to engineer the environment. The strength of the dissipation on the spin can be controlled by tuning the coupling between spin and vibrational degrees of freedom. In this way the dynamics of spin-boson models with macroscopic and non-Markovian environments can be simulated using only a few ions. Weillustrate the approach by simulating an experiment with realistic parameters and show by computing quantitative measures that the dynamics is genuinely non-Markovian.

Except where otherwise noted, this item's license is described as CC-BY International 3.0