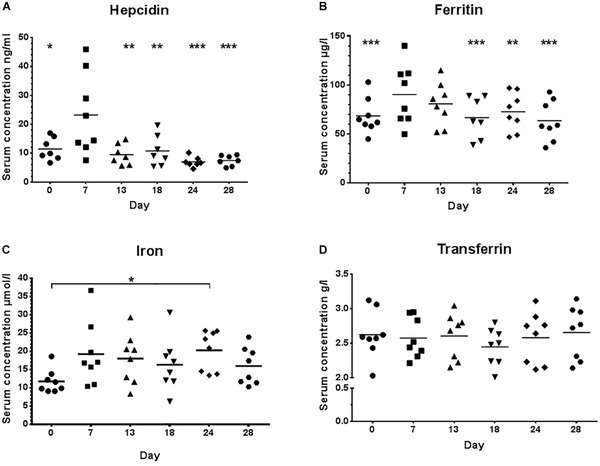 The liver-derived hormone hepcidin plays a key role in iron metabolism by mediating the degradation of the iron export protein ferroportin 1 (FPN1). Circulating levels of hepcidin and the iron storage protein ferritin are elevated during the recovery period after acute endurance exercise, which can be interpreted as an acute phase reaction to intense exercise with far-reaching consequences for iron metabolism and homeostasis. Since absolute and functional iron deficiency (ID) potentially lead to a loss of performance and well-being, it is surprising that the cumulative effects of training stress on hepcidin levels and its interplay with cellular iron availability are not well described. Therefore, the aim of this study was to determine serum levels of hepcidin at six time points during a 4-week training camp of junior world elite rowers preparing for the world championships and to relate the alterations in training load to overall iron status determined by serum ferritin, transferrin, iron, and soluble transferrin receptor (sTfR). Serum hepcidin levels increased significantly (p = 0.02) during the initial increase in training load (23.24 ± 2.43 ng/ml) at day 7 compared to the start of training camp (11.47 ± 3.92 ng/ml) and turned back on day 13 (09.51 ± 3.59 ng/ml) already, meeting well the entrance level of hepcidin at day 0. Serum ferritin was significantly higher at day 7 compared to all other timepoints with exception of the subsequent time point at day 13 reflecting well the time course pattern of hepcidin. Non-significant changes between training phases were found for serum iron, transferrin, and sTfR levels as well as for transferrin saturation, and ferritin-index (sTfR/log ferritin). Our findings indicate that hepcidin as well as ferritin, both representing acute phase proteins, are sensitive to initial increases in training load. Erythropoiesis was unaffected by iron compartmentalization through hepcidin. We conclude that hepcidin is sensitive to rigorous changes in training load in junior world elite rowers without causing short-term alterations in functional iron homeostasis.