Affective language, interpretation bias and its molecular genetic variations: exploring the relationship between genetic variations of the OXTR gene (rs53576 and rs2268498) and the emotional evaluation of words related to the self or the other 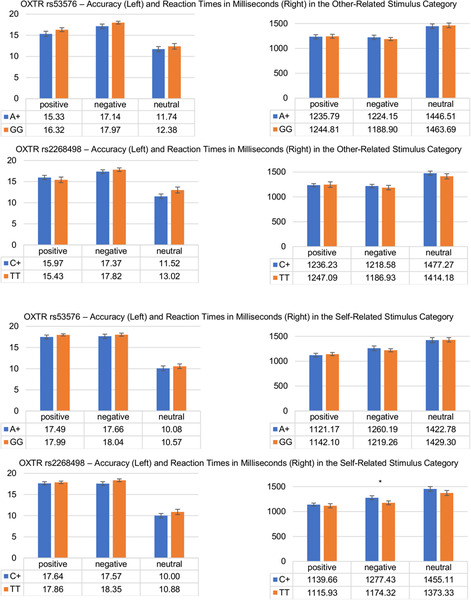 University of Electronic Science and Technology of China, Chengdu, China

Several studies have demonstrated links between oxytocin and socio-emotional information processing. Regarding the frequently studied single nucleotide polymorphism (SNP) rs53576 and the less studied, functional polymorphism rs2268498 of the oxytocin receptor (OXTR) gene, previous research suggested that their variants might be associated with different proficiency in the processing of social information. Differences between the genotype variants are not restricted to non-verbal stimulus processing but have also been reported in the verbal domain. Moreover, there is evidence that oxytocin expression influences empathic communication and language development during childhood, indicating that language-based theory-of-mind abilities may be affected by interindividual differences in OXTR genotypes as well. The present study therefore investigates whether two prominent SNPs of the OXTR gene (rs53576 GG vs. A+; rs2268498 TT vs. C+) also play a role in the affective evaluation of verbal stimuli varying in emotional valence and in self-other reference. Participants (N = 149 Caucasian participants, 104 females; A+: n = 80, GG: n = 69; C+: n = 98, TT: n = 51) were presented a series of written, self-, other-, and unreferenced words of positive, negative, and neutral valence and asked to affectively evaluate each word pair as positive, negative, or neutral by button press. In line with previous research, reaction times and accuracy (number of valence-congruent responses) showed a self-positivity bias (i.e., preferential processing of self-related positive words), which, however, was unaffected by participants’ genotype. Regarding affective evaluation of neutral words (interpretation bias), A+ carriers displayed a weaker positive interpretation bias compared to GG carriers in the other– and unreferenced stimulus categories. C+ carriers showed a weaker positive interpretation bias than TT carriers in the self-reference condition and in the other-reference condition. These effects were independent from participants’ gender. The present results suggest that the OXTR genotype and hence participants’ genetic oxytocin sensitivity may cause an interpretation bias in the spontaneous appraisal of neutral words.

Meixner, Friedrich; Montag, Christian; Herbert, Cornelia (2021): Affective language, interpretation bias and its molecular genetic variations: exploring the relationship between genetic variations of the OXTR gene (rs53576 and rs2268498) and the emotional evaluation of words related to the self or the other. Open Access Repositorium der Universität Ulm. http://dx.doi.org/10.18725/OPARU-36660