Trait-dependent tolerance of bats to urbanization: a global meta-analysis 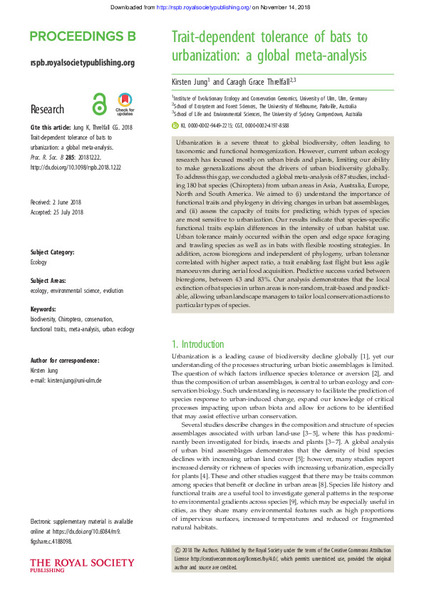 Urbanization is a severe threat to global biodiversity, often leading to taxonomic and functional homogenization. However, current urban ecology research has focused mostly on urban birds and plants, limiting our ability to make generalizations about the drivers of urban biodiversity globally. To address this gap,we conducted a global meta-analysis of 87 studies, including 180 bat species (Chiroptera) from urban areas in Asia, Australia, Europe, North and South America. We aimed to (i) understand the importance of functional traits and phylogeny in driving changes in urban bat assemblages, and (ii) assess the capacity of traits for predicting which types of species are most sensitive to urbanization. Our results indicate that species-specific functional traits explain differences in the intensity of urban habitat use. Urban tolerance mainly occurred within the open and edge space foraging and trawling species as well as in bats with flexible roosting strategies. In addition, across bioregions and independent of phylogeny, urban tolerance correlated with higher aspect ratio, a trait enabling fast flight but less agile manoeuvres during aerial food acquisition. Predictive success varied between bioregions, between 43 and 83%. Our analysis demonstrates that the local extinction of bat species in urban areas is non-random, trait-based and predictable, allowing urban landscape managers to tailor local conservation actions to particular types of species.